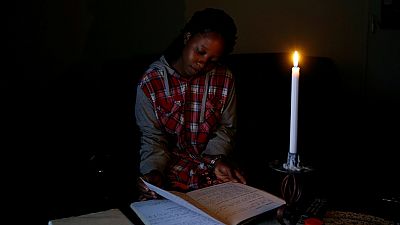 President Emmerson Mnangagwa’s pledge to revive Zimbabwe’s economy is being threatened by the worst power cuts the country has experienced in three years.

The power cuts that last up to 10 hours daily in some areas are threatening mining output in one of the world’s biggest platinum and gold producers.

The sector, which generated most of Zimbabwe’s $4.8 billion of export earnings last year, is crucial to President Emmerson Mnangagwa’s pledge to revive an economy ravaged by drought and soaring inflation.

Three years ago, power cuts that extended up to 18 hours hit production at gold mines and producers subsequently agreed to pay a higher tariff to guarantee supplies.

The mines have so far been saved from the rolling cuts, which the state-owned power firm said would be open-ended, but there is no guarantee they will continue receiving electricity if the blackouts are prolonged.

Here is a look at why Zimbabwe is facing electricity shortages, what it means for economic revival efforts and what the government is doing to tackle the problem.

How did Zimbabwe get here?

For the past 20 years, Zimbabwe has struggled to generate enough electricity to meet demand, and has had to turn to countries like Democratic Republic of Congo, Namibia, Mozambique, South Africa and Zambia to top up supplies.

During the 2000-2008 recession when the southern African country was in the grip of a dollar crunch and hyperinflation, it became harder for it to pay for the imports, leading to most of these countries to demand cash upfront.

Zimbabwe has one hydro power plant and four coal-fired generators with a total combined capacity of 2,240 MW, just enough to meet the country’s demand.

But the Kariba hydro plant, which commissioned another 300 MW last year, is only producing a third of its design output because of low dam water levels due to the drought.

Hwange, the biggest coal-fired plant was built in the 1980s and work only started last year to add another 600 MW begin after years of false starts during Robert Mugabe’s 37-year rule.

The new generators will only come on stream in three years and even then, this does not guarantee power because the major coal supplier, Hwange Colliery, is struggling to stay afloat.

Three other smaller coal-fired plants with capacity to add 270 MW to the national grid are down after negotiations to secure funding from India’s Export and Import Bank to repair and upgrade the generators floundered.

In the last decade, Zimbabwe signed at least six power generation agreements, including solar power that would have added more than 3,000 MW in new electricity to the grid, but the projects failed to take off due to bureaucracy and lack of funding because of the country’s high political risk profile.

What is at stake?

Zimbabwe can ill afford any production interruptions in the mining sector, the mainstay of the economy.

Officially, the country is projected to register anemic economic growth this year after drought devastated agricultural output and a cyclone ripped through parts of eastern Zimbabwe.

A drop in mining production could tip the economy into recession, economic analysts say.

Gold is the single largest mineral export and the government is on an aggressive drive to raise output from the record 996,373 ounces last year, but without power, these efforts will be in vain.

Producers of platinum import their own power, which secures production, but gold mines rely on the unstable national grid. Although they have been spared from the power cuts so far, they are not assured this will continue if the blackouts continue.

Zimbabwe is the world’s third-largest platinum producer after South Africa and Russia.

The country’s manufacturing sector, for years struggling to compete with imports mostly from South Africa and China, also needs electricity to protect jobs in a country where formal employment is only 20 percent.

“The government cannot afford to switch off the mines, it will be like biting the hand that feeds you,” said John Robertson, a Harare-based economic analyst.

He said the power cuts would also hit farmers, particularly those who are in the process of planting irrigated winter wheat, the country’s second main staple crop after maize.

What is govt doing to resolve the crisis?

The government says it has approached Mozambique to negotiate a power purchase agreement. But given a severe shortage of dollars, Zimbabwe may not have money to secure adequate supplies from its neighbour.

In the long term, Zimbabwe will consider building a power station near Mozambique’s Hydro Cahora Bassa dam, Justice Minister Ziyambi Ziyambi told parliament on Wednesday. Mnangagwa this week replaced the energy and power development minister after a public outcry over the cuts.

The national energy regulator has been licencing a raft of solar power projects, most of which are still to take off. In any case, analysts say the projects are off grid and too small, averaging 5 MW and will only supply electricity to local communities in the countryside.