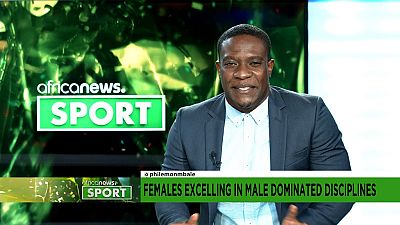 A world that has been dominated by men for as long as written history goes. Sports over time has created several disciplines whose events have been shaped to fit the morphology, strength and intentions of a man.

Football, rugby, wrestling and even athletics have been hugely but not completely dominated by men. Today in these disciplines, women are toppling records, filling bridges and also playing roles of responsibilities in taking major decisions and arbitration in the out comes of these sporting events.

To site a few, Marta Vieira da Silva, commonly known as Marta, is a Brazilian footballer who plays for the Orlando Pride in the National Women’s Soccer League and the Brazil national team as a forward. She has been likened to one of football’s ever great, Martha is called Pele in skirt.

She has been named a record 6 time FIFA world footballer of the year, one more than both Christiano Ronaldo and Lionel Messi.

With 110 goals for Brazil, Martha now has more goals than Ronaldinho and Neymar with the Brazilian national team.

Another out standing female performance is from “baby face destroyer” Tirunesh Dibaba from Ethiopia. She is vehemently holding on to the world and olympic 10,000 metres title and in total has won five world track titles and five world cross country titles, a record which sounds more appealing than the entire career accolades of most male athletes.

Serena Jameka Williams is a professional tennis player who has lasted longest as world number 1 in women’s single rankings. Considered as the best to have ever existed she has shown incredible strength, physique and athletism both on and off the court. She has won on several occasions major single titles from Australia, French, Wimbledon and the US opens.

The ever growing list of female accolades continues, this time in the world of arbitration in sports.

In september 2017, Bibiana Steinhaus became the first female referee in one of Europe’s top 5 leagues when she handled the whistle in a 1-1 draw between Hertha Berlin and Werder Bremen.

Another rare feat came in just last weekend on the African continent.

Jonesia Kabakama of Tanzania became the first Woman to be tasked with managing a Men’s AFCON game at any category with the whistle. A group B decider between Cameroon and Senegal ended in a goalless score after the 36 yr old managed through the 90 minutes without any major hitches.

This same lady in 2016 handled a top rated league derby between Simba SC and Young African.

And then the latest to take place in France will be Stephanie Frappart who will become the first female center referee to handle the ligue 1 game between Amiens and Strasbourg. She has been officiating ligue 2 matches in France since 2014.

The announcement by the French Football Federation follows a request by FIFA to help female referees who will be officiating the Women’s world cup later in June to be adequately prepared for the competition.

The wind of change in sports over the years continues to blow in favour of female athletes and sports women who gradually are picking up nerve wrecking roles in male dominated events.