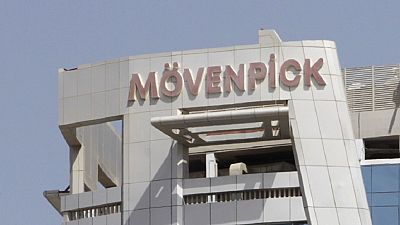 Staff at one of Ghana’s five-star hotels went on strike on Wednesday protesting what they said was racist mistreatment by management, the state-owned Daily Graphic reports.

The report said staff numbering about 100 had laid down their tools and pitched camp at the reception of the Mövenpick Ambassador Hotel located in the heart of the capital, Accra.

The irate employees were gathered amidst drumming and dancing insisting that the General Manager, one Michael Rathgeb, be dismissed. The accuse him of being the architect of the racist treatment which dates back to 2011.

Some customers were also left stranded by the incident. They looked on helplessly as staff waved protest placards demanding the firing of their superiors.

Workers who spoke to the Graphic alleged that among other preferential treatments, locals were dismissed over misdemeanours whereas expatriate staff were left off the hook even in instances when they stole from guests.

Police officers were called upon to control the situation with management refusing to comment on the development as at the time. Later reports indicated that management said they were going to seek for legal advice.

The hotel is one of the upscale facilities in the country. It usually hosts major events involving politicians and top entertainers in the country. The recent development will be seen as a big dent on their reputation.