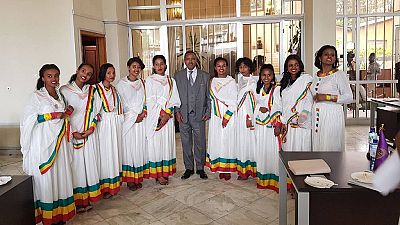 The plan by an Ethiopian bank to operate an all-female branch has received varied reactions from social media users. The Commercial Bank of Ethiopia, CBE, announced on Monday that it had opened the said branch in the capital, Addis Ababa.

On social media platform, Twitter, users have expressed polarizing viewpoints. Majority say it was an unnecessary publicity stunt, others called for a reconsidering of the move whiles a few expressed support.

Ethiopia has at the political level been celebrated for giant strides in women appointments. Under Prime Minister Abiy Ahmed, the country has Africa’s only female president as at April 2019, in the person of Sahle-Work Zewde.

Abiy’s cabinet as of October 2018 is gender-par with women occupying ten of twenty slots. The Supreme Court judge is Meaza Ashenafi, the first woman to hold the post with the elections board boss also led by Birtukan Mideksa, a former judge.

CBE, is the largest commercial bank in Ethiopia, established in 1942. The bank says it’s the pioneer of modern banking to the country with more than 1340 branches across the country.

Below are some reactions:

Wouldn’t it make more sense giving directorial, Managerial and VP positions to women rather than this

WHY segregation? I strongly believe the leadership of women, but it is against the equality principle to cause them to work alone! Monetization of gender shall be stopped!

What is the point?
It would make sense for combankethiopia to be more competitive by fixing basic service quality !

… are males allowed to use the bank?…. obviously the management has no clue about gender equality when deciding this non-sense…. ???

The places I encounter gender segregated service centers r in the countries where there is already a gender segregation in the social system (Mostly out of religious piety).Ethiopia didn't have this issue & introducing the system in a banking sector is just a waste of resources.

Is the person behind this idea had any affiliation to a middle eastern country? I saw these types of segregation in the Arab Countries.

Rather How about improving their lives by paying better salaries which equals as much as men in this company?

Its good idea to give key positions to women but this one is called segregation. What if the bank fails? Are you going to blame those women in position. Think twice

This branch will be the most profitable one compared to all other CBE branches !!!!!