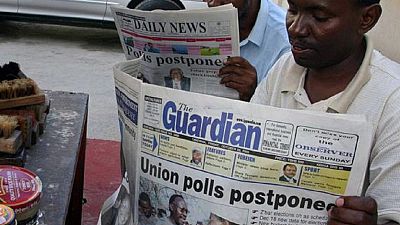 Tanzania has given the clearest indication yet that it will reconsider harsh laws that have seen the media landscape shrink under the President John Magufuli government.

According to the Mail and Guardian news portal, the admission of review was made when the Information Minister, Harrison Mwakyembe, met with two media rights groups in the city of Dodoma.

The country’s 2016 Media Services Act has been widely criticized as hampering the constitutional right of journalists to execute their mandate with rights groups describing it as a violation of the right to free expression.

Under the act, suspensions have been handed to media outlets including the 2017 ban on four newspapers. The law gives the government the power to restrict and limit the independence of the media.

Members of the Tanzania Editors Forum, TEF, and the International Press Insitute, IPI, met with the minister as part of efforts aimed at improving the environment for the work of journalists in the East African nation.

“Building a strong media sector involves not only raising professional capacities, but also creating an environment in which journalists are able to fully exercise their national role as the fourth estate alongside the executive, judicial and legislative branches,” said TEF and IPI in a joint statement.

“The spirit of openness expressed this week offers an opportunity for government officials, legislators, journalists, media owners and civil society to collaborate on a positive media framework in Tanzania that further develops the profession while protecting journalists’ rights.”

Human Rights Watch (HRW) in March 2019 condemned the ban of a leading newspaper, The Citizen, saying it is part of a series of attacks on freedom of expression by the government of president John Pombe Magufuli.

The Citizen was banned for seven days from circulation offline and online, after having been accused of spreading false information about the devaluation of the Tanzanian shilling.

Last year, several civil society organisations including the Committee to Protect Journalists (CPJ) , wrote a letter to Magufuli asking his government to end attacks on journalists and acknowledge the critical role that the civil society and independent media play in promoting peaceful coexistence.