More than 50 mass graves were discovered by a joint UN and government fact-finding mission after ethnic violence in mid-December in a region of western Democratic Republic of Congo, the UN announced.

“There are more than 50 mass graves or mass graves and individual graves that we have identified” in Yumbi in the western province of Mai-Ndombe, Abdoul Aziz Thioye, director of the Joint UN Office for Human Rights in the DRC (UNJHRO), said on Friday.

“This suggests that the number (of deaths) is quite high because a common grave (depending on) size can contain five, ten bodies” or even “one hundred bodies or four times more,” explained Thioye.

“Investigations are ongoing. They killed soldiers and police officers, recovered their weapons and massacred,” said General Fall Sikabwe, army chief in the western region of the DRC, with no further details on the killers.

An AFP journalist who accompanied the joint Congolese authorities and UNJHRO mission to Yumbi on Friday noted that the army is deployed there and that there was tension in the area.

The violence, linked to disagreements over ancestral lands between members of the Nunu and Téndé communities, broke out after the burial of a Nunu traditional chief on land claimed by the Tende, despite the ban imposed by local authorities.

Since 16 December 2018, more than 16,000 people have found refuge in the Republic of Congo by crossing the Congo River, the UN said in a report dated 17 January.

At least 890 people were killed between 16 and 18 December in four villages in Yumbi territory, in the province of Mai-Ndombe, more than 300 km north of Kinshasa, the UN High Commissioner for Human Rights said in a statement on January 16.

The government puts the death toll at around 100.

Some 465 houses and buildings were burned or looted, including two primary schools, a health centre, a health post, a market and the office of the National Independent Electoral Commission (Céni).

Ongoing investigations will have to demonstrate “who did what,” Mr. Thioye said, in order to “prosecute potential perpetrators” of “these large-scale killings,” leaving it to the courts to decide whether it is genocide.

“It was a great sorrow for me to see my followers, the Baténdé and the Banunu kill each other,” Father Jean-Pierre Mangulu of the Catholic parish of Christ-roi in Yumbi told AFP. “There have been many deaths among the Banunu.”

Due to the violence, general elections were not held in Yumbi on 30 December. Legislative and provincial elections will be held in March, according to Congo’s Electoral Commission. 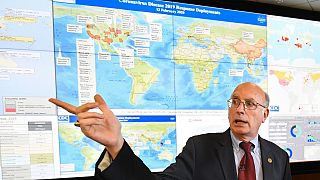