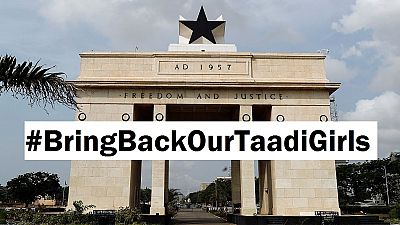 There is currently a social media hashtag in Ghana demanding the rescue of three young ladies abducted by a Nigerian in the country’s Western Region.

#BringBackOurTaadiGirls is currently being used especially on Twitter to demand that police takes necessary action in a case that was reported over a month back.

All girls were reportedly kidnapped in Takoradi, capital of the oil-producing region. “Taadi” is a short form for Takoradi. Priscilla Mantebea Koranchie (15 years) was last seen on December 21, 2018.

But before her incident, another 18-year-old Ruth Love Quayson had been kidnapped on the 4th of December. The other victim Priscilla Blessing Bentum also believed to be kidnapped was last seen on 17th August, 2018.

Police reportedly arrested a Nigerian national believed to be behind the incident but the suspect is said to have escaped from custody. He has since been rearrested but father of the 15-year-old said he believed his daughter had been killed.

Disturbed mother of another missing girl told local media portals that the kidnapper had taken a partial ransom but failed to deliver the girls.

A grieving mother begged the authorities to locate her daughters – whether dead or alive, stressing how difficult life had been without her daughter.

Some social media reactions are as follows:

If police inertia is slowing their recovery, your alertness can help #BringBackOurTaadiGirls.

Keep them in your thoughts and prayers too. pic.twitter.com/JgilQOYhru

The Ghana Police have been a disaster in investigating the kidnappings of these three young women since AUGUST.

Social media now doing its thing. If you see something, say something.#BringBackOurTaadiGirls pic.twitter.com/6zNXeDhKez

This is quite disturbing. I was remarking the other day how there seems to be a surge in the number of « missing person » reports circulating #Ghana social media. Hope they are found alive and safe and brought home soon. #BringBackOurTaadiGirls https://t.co/OVqMKKUEkH

My city, Takoradi, where I grew up is not known for kidnapping. These young girls and their families deserve decent normal lives and not trauma/terror. GhPoliceService prove your competence and speed up work to #BringBackOurTaadiGirls Starr1035Fm BBCWorld HuffPost pic.twitter.com/1l4Bk0fpfO