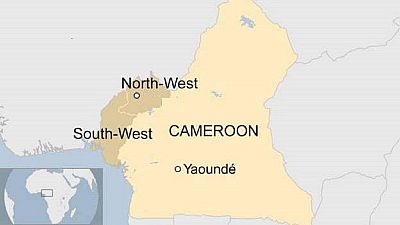 Over four million Cameroonians are suffering the consequences of the long-running conflict in the country’s North-West and South-West since late 2017.

What has become known as the Anglophone crisis has destabilized and dragged the hundreds of thousands to flee the country with others internally displaced.

The violence has uprooted 437,500 people from their homes and forced over 32,000 to seek refuge in neighbouring Nigeria according to a report by a United Nations body, OCHA.

“Most of these people barely have enough to eat, not to talk of a decent place to live or access to proper sanitation services,” according to a recent United Nations Office for the Coordination of Humanitarian Affairs (OCHA) publication as of 31 December.

Majority of the displaced are women and children. Many of the affected people are growing more vulnerable as the violence persists and humanitarian assistance remains inadequate.

The humanitarian community is finalsing the 2019 response plan to shore up assistance. A breakdown of the affected persons is as follows:

• More than 40 per cent of clinics and health centres no longer provide vaccinations, less than 15 per cent of births are assisted by skilled attendants.

Socio-political issues in and about the anglophone region of Cameroon have been a matter of contention throughout the post-colonial period. Political protests intensified in 2016.

After months of protests against perceived marginalisation, violence erupted in North-West and South-West prompting security clampdowns. With the proliferation of non-state armed increased insecurity, violence and loss of life have forced thousands of families to flee their homes.

Many civilians have been killed and displacement continues to have serious consequences on livelihoods and living conditions of the affected populations.

Vulnerability has been further compounded by limited access to education for children due to a ban and attacks on schools by the armed groups. The crisis further worsened from mid-2018 due to increased hostilities ahead of the presidential election.

Movements are restricted in the two regions due to a curfew in the North-West, a “No Movement” declaration by non-state actors and the increase of both official and informal checkpoints.

Insecurity in the affected regions remains high, with continuing armed attacks and confrontations between the military and armed groups.

In early December, troops clashed with armed elements in Momo, Ndonga, Bui and Ngoketunjia divisions in North-West resulting in fatalities and destroyed vehicles. In the South West, incidents of shooting were reported in Muyuka and Ekona, linked to increased presence of armed groups.

Little political progress has been made to resolve the conflict. The ‘Anglophone General Conference’ set to discuss the crisis on 21 November was postponed with no new date announced.

The conference organizers appealed to the Government to negotiate with the separatist groups to disarm, but no such talks have been held.

A stay-home protest continues to be observed every Monday in the main towns of the two regions. Violence and political activities ticked up during the 2 November start of the trial of Sisiku Julius Ayuk Tabe, a separatist leader arrested in January 2018 in Nigeria and deported to Cameroon, and nine others. The case was adjourned to February.

The violence has uprooted 437,500 people from their homes and forced over 32,000 to seek refuge to neighbouring Nigeria. Humanitarian organizations are striving to step up presence in the conflict-hit regions since launching a response plan in May 2018 targeting 160,000 people.

However, armed fighting and insecurity is a prominent impediment to provide assistance as well as a barrier for those in need to reach areas where they can receive aid.

The majority of the displaced are women and children. Food, shelter and civilian protection are the principal humanitarian needs, although across all sectors needs are high.

Many of the conflict-affected people are growing more vulnerable as the violence persists and humanitarian assistance remains inadequate. The humanitarian community is finalising the 2019 response plan to shore up assistance.

WFP, UNICEF, WHO and UNHCR have declared a Level 2 emergency owing to the worsening humanitarian situation in the two regions.

The humanitarian community has developed an Emergency Response Plan (ERP) earlier this year; in parallel the government had also initiated a humanitarian plan. Deployment of humanitarian actors continues in the fiel