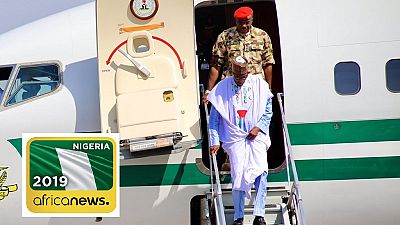 Nigerians go to the polls in mid-February to elect a new president and lawmakers. Buhari departed Abuja to Borno State capital Maiduguri, where he is to address a crowd.

The septuagenarian has been visiting different states across last week as part of his reelection campaign. He is expected to visit all 36 states before the February 16 polls.

He has so far visited Akwa Ibom, Bauchi, Kogi, Delta, Edo, Kaduna, Niger and Plateau States. After Borno, he is expected in Yobe State for a similar rally.

Borno State is currently under the leadership of Governor Kashim Shettima, who is the outgoing governor. Shetimma like Buhari belongs to the ruling All Progressives Congress, APC.

Reports indicate that security is high in the state as thousands of people have gathered at the Ramat Square, venue to the rally to receive the president. There is a thorough screening of people massing up to enter the venue.

Not forgetting the security challenges, obedient citizens lined up to be screened at #RamatSquareMaiduguri #PMBInBorno pic.twitter.com/B4knoXTR4K

Borno is the worst affected by the Boko Haram insurgency which has been raging for years. It has led to deaths and mass displacements.

The Nigerian army and airforce continue to battle with the insurgents. The security forces are battling the Shekau faction of the group and the Islamic State in West Africa Province, ISWAP.

Today the #PMB4Plus4 Train moves to Borno and Yobe States. Here are the ‘letters’ from the States visited so far… pic.twitter.com/IUV8ueuIt8