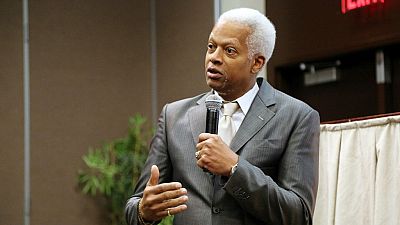 US Congressman Hank Johnson , a senior member of the House Judiciary Committee, on Friday condemned the shooting death of Ghanaian journalist Ahmed Hussein-Suale, who was killed late Wednesday in Ghana’s capital Accra.

Hussein-Suale was an undercover journalist. In 2018, he was part of a team whose investigation of widespread corruption in Ghanaian and international soccer exposed more than 100 referees taking bribes; resulted in outright dissolution of the Ghana Football Association; and led to a lifetime FIFA ban for Mr. Kwesi Nyantakyi, who was a member of the FIFA Council, the sport’s supreme international governing body.

When the instigation by government officials of violence against journalists is tolerated in any country, it imperils the free press everywhere, including here in the United States.

When the results of that anti-corruption investigation became public in mid-2018, Mr. Hussein-Suale was targeted with outrageous threats of violence by Mr. Kennedy Agyapong MP, a member of the Ghanaian parliament and media executive with close ties to those directly implicated in Mr. Hussein-Suale’s journalism.

In May and June 2018, Mr. Agyapong openly called for violence against Mr. Hussein-Suale, published his photograph and publicized his whereabouts. Mr. Agyapong’s actions were condemned at the time by the Committee to Protect Journalists and Reporters Without Borders.

On Friday morning, Congressman Johnson wrote to the State Department to request that U.S. diplomatic authorities report to Congress regarding:

1. Assess the potential scope of U.S. diplomatic, law enforcement, and intelligence support for the Government of Ghana’s investigation of Mr. Hussein-Suale’s death, including potential Federal Bureau of Investigation support via the Office of the Legal Attaché at the U.S. Embassy in Accra;

2. Conduct an independent assessment of the murder and the quality and scope of the Ghanaian government’s investigation; and

3. Determine what sanctions may be levied against Kennedy Agyapong MP, including a ban on travel to the U.S., a ban on access to the U.S. banking system for Mr. Agyapong and his businesses, and any other appropriate and applicable sanctions.

“When the instigation by government officials of violence against journalists is tolerated in any country, it imperils the free press everywhere, including here in the United States,” said Rep. Johnson. “The United States government should offer its powerful investigative capabilities to the Ghanaian government to help bring these killers to justice.

When unscrupulous politicians and public figures openly call for violence targeting journalists, they should be held to account. As in the case of Jamal Khashoggi, those responsible for this murder, no matter their lofty titles, must face justice.”

US Representative Hank Johnson, has called on Secretary Of State to look into blocking Ken's USA dealings.