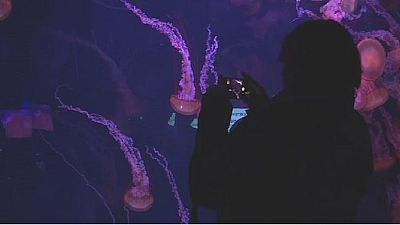 ‘’ Cannonball’‘, ‘‘moon’‘ or ‘‘fried eggs’‘…..A dozen species of jellyfish in a Parisian aquarium. The aquarium is hoping to use this animal to raise awareness about climate change and the health of our oceans.

After three years of work in association with world experts in Kamo, Japan, the new edifice housing the aquarium opened in Paris, France on Wednesday. It features twenty-four pools in which forty-five species of jellyfish from all over the world, raised in the aquarium laboratory, will be displayed in rotation.

In here, the light is dim so visitors can appreciate the beauty of these jellyfishes who reside in the ocean. Four prototype tanks also show the jellyfish from above, believed to be ‘‘a first in the world”.

“It’s beautiful, it’s hypnotic. You can watch it for hours and you never get tired. Besides, the presentation, I think it’s very beautiful. We really see them well, there is illumination, as the rooms are dark, we really see the movements of the jellyfish. I am amazed”, Carmen a visitor said.

Most sea jellies as they are also called reproduce by giving birth to 2mm polyps that remain at the bottom of the sea for decades before a temperature shock allows jellyfish to be born, says managers of the aquarium.

Sea jellies feed on a microscopic small shrimp, but others as the’‘ scrambled egg’‘ jellyfish can consume a jellyfish per day.