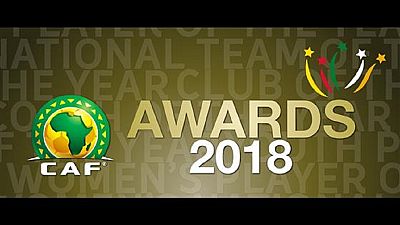 The Confederation of African Football, CAF, has a busy week ahead – it is expected to dispatch its annual awards and a day after name a host for the 2019 African Cup of Nations.

The 2019 CAF Awards event is slated for the Senegalese capital, Dakar, and will have three presidents in attendance.

As is usually the case, the host nation’s president in this case Macky Sall is an invited guest but two other African leaders are expected to join the ‘party’ – Rwanda’s Paul Kagame and Liberia’s George Manneh Weah.

Ahead of the event, CAF president, Ahmad Ahmad, along with head of football world governing body, Gianni Infantino and FIFA secretary-general Fatma Samoura, have paid an official visit to Guinea – where they are expected to meet high level officials of the game and the country.

Strong mobilization of Guinean footbal fans by the Guinea Football association for a warm reception of FIFA Presidenr Gianni Infantino who is visiting Guinea for the first time in the presence of the CAF president Ahmad AHMADCAF2017 FIFAcom fatma_samoura pic.twitter.com/HtbajQ6qPO

On January 8th, the wards will take place inside the Abdou Diouf International Conference Center. The main award of the night will pit the same nominees as last year – Egypt’s Mohamed Salah, Senegal’s Sadio Mane and Gabon’s Pierre Emerick Aubameyang.

Salah is widely tipped to retain the crown he won for the first time last year. We will know who the best players, teams and coaches on the continent are.

The day after, CAF Executive Committee will hold a crucial meeting to decide the faith of the hosting country for the AFCON 2019. That race is between Egypt and South Africa. CAF stripped Cameroon of the rights and reopened a bidding process for the 2019 AFCON.