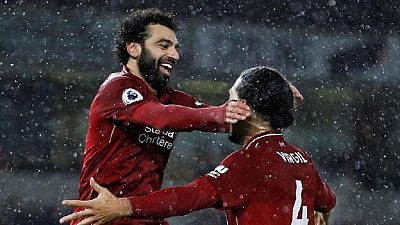 Egyptian international Mohamed Salah was instrumental to Liverpool’s English Premier League, EPL, win away at the Molineux Stadium against Wolves on Friday night.

The Egyptian scored the first goal for Jurgen Klopp’s side before providing an assist for teammate Virgil Van Dijk to wrap up the three points for the Reds.

The win means the Anfield side maintain their lead at the top of the league ahead of the Christmas and Boxing day fixtures. Salah is also leading the goal king chart with his 11th strike of the league season.

“Since the start of last season, Mohamed Salah has scored and assisted in eight different Premier League games for Liverpool – more than any other player in the division,” football info statistician Opta Joe noted..

—Goal: ✅
—Assist: ✅
—League leader in goals: ✅
—Top of the table: ✅MoSalah is the gift that keeps giving. pic.twitter.com/SaB17Tkilb

“It’s amazing to get my first league goal for Liverpool. It was a tough day for me as I’ve had a bit of a cold but these are big nights for us,” Van Dijk said after the game.

Other African players who featured for Liverpool included Guinean Naby Keita and Senegalese international Sadio Mane. Liverpool are chasing an elusive league title in over decades.

The current champions, Manchester City, are breathing down the necks of Liverpool, who remain the only side in the league to be defeated.

3 – Liverpool have topped the Premier League on Christmas Day without going on to win the title more times than any other side in the competition’s history (3 times). Chalice.