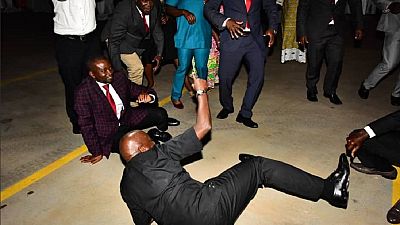 Ugandan members of parliament are trending on social media after they participated in the viral Malwedhe dance challenge, at their end of year party on Thursday.

The Malwedhe dance, inspired by a song from South African musician, King Monada, involves people falling to the ground and ‘fainting’ when the chorus of the song plays.

The dance also known as Idibala challenge went viral in November as several posted videos of themselves ‘falling’ and ‘fainting’ at several places including schools, vehicles, construction sites, party venues among others.

And now, Uganda’s lawmakers, who were celebrating a retro themed party to wind up the year, also decided to roll on the ground, in their dapper suits and evening gowns.

Members of Parliament doing the #MalwedheChallenge . Get the details tonight on Spark TV's #LiveWire ? pic.twitter.com/XkVTUJOCPh

Embattled legislator, Robert Kyagulanyi, who is popurlarly known as Bobi Wine, was also allowed to perform his hit song ‘Kyarenga’, which got his fellow MPs singing along and joining him on stage.

The mawmaker, who is also a popular musician in the country, has recently been battling with security agencies over the right to stage concerts and perform his music, in different parts of the country.

Hon Robert Kyagulanyi perfoming his famous song titled 'Kyarenga' during Parliament's End of Year Party. It was an exciting perfomance that saw MPs and staff join him on stage. pic.twitter.com/o1czSBGPlg

Several Ugandans ridiculed the legislators, arguing that they seem to engage in more fun than the legislative work they are elected to deal with.

Members of Parliament led by Hon Hamson Obua and Hon Odonga Otto perfom the famous 'Malwedhe dance' It was a fascinating spectacle seeing MPs get on ground. pic.twitter.com/jcHnk9cqCF

Police can let parliament listen to it free, yet those who pay for it are denied the chance, this police also, double standards

Wow.. Kale I missed that. Wish I was an mp too.what a joy that they received from the kyarenga song!!!