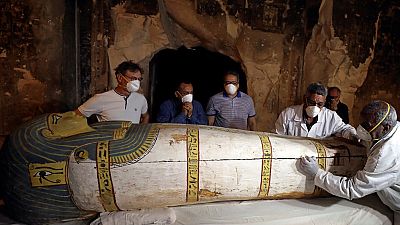 Egypt may not be done revealing all its secrets. On Saturday, November 24, several burial objects and a previously unopened sarcophagus were unveiled for the first time on the west bank of Luxor.

The sarcophagus contained a well-preserved mummy of a woman named Thuya from the 18th Egyptian dynasty.

“I am proud to have led this expedition. All those who worked on this discovery were Egyptians. The restoration expert, the excavator, the excavation technician and the one who documented, all are Egyptians’‘, said Mostafa Waziri, Secretary General of Egypt’s Supreme Council of Antiquities.

I am proud to have led this expedition. All those who worked on this discovery were Egyptians. The restoration expert, the excavator, the excavation technician and the one who documented, all are Egyptians.

The discovery was led by a French mission in the northern region of El-Assasif. Egyptian and French archaeologists had to move nearly three hundred metres of rubble in five months to access the tomb. It contained colourful wall scenes depicting the owner and his family.

‘‘We found almost two intact wooden coffins in perfect condition of preservation with flowers on the top of it. Then we opened them, and we found that the mummies were in perfect conditions of preservation. Reading the names in hieroglyphics, we found that the name is ‘bodi isse’. What does it mean? It means back to the dynasty number 25 or 26. And he was the high priest of the god Amon. How many objects did we find inside the tomb? More than one thousand ushabti (funerary figurines in Ancient Egypt) statues.” , Waziri added.

Ancient Egyptians mummified humans to preserve their bodies for the afterlife. This year, Egypt revealed more than a dozen ancient discoveries.

Egypt is hoping these discoveries will brighten its image abroad and revive interest among travelers who once flocked to its iconic pharaonic temples and pyramids.

These tourists shunned the country since its 2011 political uprising, which has seen a relative improvement in recent months.