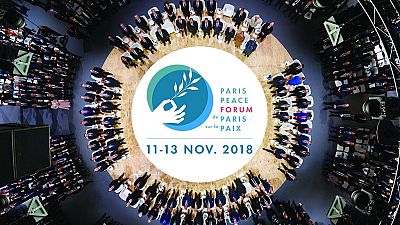 World leaders are meeting in the French capital, Paris, for a peace meeting. The event is tied to the commemoration of the centenary of World War I.

A number of African leaders have since late last week flown into Paris to join their colleagues from other parts of the world. French President Macron has been joined by around 70 leaders for the forum.

Dubbed the Paris Peace Forum, it started from November 11 and will run till November 13, 2018. Leaders are expected to share their views during the forum.

The aim of the forum is to show that there are lots of forces in the international system — states, NGOs, foundations, intellectuals, companies — who believe we need a world of rules, an open world and a multilateral world.

The list of African leaders attending the event spans across the different continental blocs. It, however, has leaders of Francophone Africa in the majority.

African leaders in Paris for meeting

The African Union Commission, and United Nations chairpersons, Moussa Faki Mahamat and Antonio Guterres are also in attendance. Other leaders attending include US and Russian Presidents Donald Trump and Vladimir Putin.

The leaders met to mark 100 years since the end of World War I at a time of growing nationalism and diplomatic tensions. 2018 marks the centenary of the 1918 Armistice in the French capital.

British Prime Minister Theresa May and Queen Elizabeth attended a separate event in London, while New Zealand and Australia are holding their own ceremonies.

Why the Paris Peace Forum?

The Paris commemorations, centred on the Tomb of the Unknown Soldier beneath the Arc de Triomphe, with Macron stressing on warnings about the modern-day danger of nationalism.

“This day is not just about remembering, but should be about a call to action,” German Chancellor Angela Merkel said Saturday after visiting the forest clearing in eastern France where the Armistice was signed.

Merkel delivered the opening address alongside UN Secretary General Antonio Guterres at the Paris Peace Forum which started after the memorial service on the Champs-Elysees on Sunday morning.

Conceived by French President Emmanuel Macron, the Forum is intended to highlight the importance of international institutions in helping resolve conflicts, avert wars and spread prosperity.

The Forum is part of the “fightback” against nationalism worldwide, chief organiser Justin Vaisse told AFP as he played down the significance of Trump’s decision not to attend.

“The aim of the forum is to show that there are lots of forces in the international system — states, NGOs, foundations, intellectuals, companies — who believe we need a world of rules, an open world and a multilateral world,” he said.

Brief about World War I

About 70 current-day nations were involved in the conflict that had six empires and colonial powers at its heart: Austria-Hungary, Britain, France, Germany, Russia and the Ottoman Empire.

Around 10 million soldiers are generally estimated to have been killed during the fighting and more than double that number wounded overall.

Between five and 10 million civilians are estimated to have been killed.