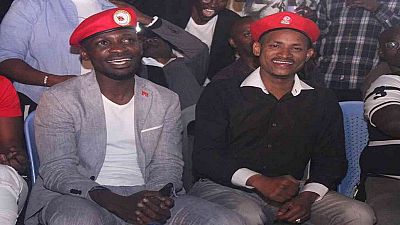 A popular Kenyan legislator, Babu Owino has been barred from stepping a foot in Uganda. Ugandan minister of internal affairs Haji Abubakar accused Babu Owino for undermining the government and further added that Babu will need special clearance from his ministry to visit the country.

“Our attention is drawn to the joint subversive activities of Robert Kyagulanyi popularly known as Bobi Wine and his Kenyan counterpart Babu Owino to undermine the legitimately elected government of the Republic of Uganda. Any person found aiding or abetting the violation of this directive will be in contravention of a legal order and will be liable for prosecution,” he said.

Bobi Wine, who is behind a ‘people-power revolution’ in Uganda was last month in Kenya to launch a ‘Youth for Africa’ movement. He appeared in a rally in Nairobi and even got invited in several T.V shows in Kenya and was constantly accompanied by Babu Owino.

It is at these events that the Ugandan government says “the duo uttered inflammatory and seditious words against the democratic and legitimate rule of President Yoweri Museveni”.

Kyagulanyi, 36, attracted a youth following through songs critical of Museveni and his prominence rose due to an incident in August in which his driver was shot dead and he was detained and charged with treason over what authorities said was the stoning of Museveni’s convoy.

His jailing had sowed discontent in Uganda and neighboring Kenya, where protesters took to the streets to call for his release.