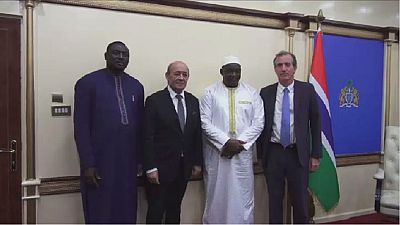 Gambia has received 30 million euros of aid from France in support for a democratic transition in the West African country.

I would like to seize this opportunity to sincerely thank France for the support.

During his visit, the head of French diplomacy also met with President Adama Barrow, who succeeded Jammeh, who had been in power for 22 years.

Barrow won the December 2016 election by beating exiled Jammeh, who fled Gambia after regional militaries launched an operation to remove him.

Noting France’s support Mamadou Tangara Gambian Minister of Foreign Affairs said, “And I would like to seize this opportunity to sincerely thank France for the support. For those of you who are not aware of it, during the very difficult days, at the UN, one of the first ambassadors that came to me and said Mamadou, be rest assured that France will be by your side, was the French permanent representative.”

As a sign of Paris’ desire to strengthen its presence in Gambia, which Prince Charles, heir to the British throne, visited last week, Le Drian opened a new French diplomatic office in Banjul.

Under President Emmanuel Macron, France is attempting to broaden its economic influence in Africa to anglophone regions.

French firms including Bollore and energy group Total are among those vying for contracts in Gambia.