African countries where journalist killers 'get away with murder': CPJ 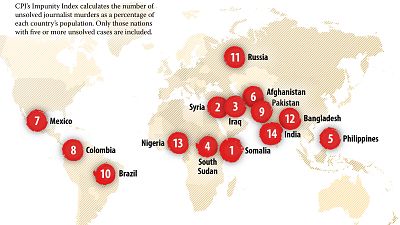 Somalia, South Sudan and Nigeria are the African nations listed among the countries where killers of journalists can ‘get away with murder’.

For the fourth year in a row, Somalia topped the Global Impunity Index released by the Committee to Protect Journalists (CPJ).

CPJ’s 2018 Global Impunity Index was released on November 2, the International Day to End Impunity for Crimes against Journalists. The UN-recognised day draws attention to the low global conviction rate for violent crimes against journalists and media workers, estimated at only one in every ten cases.

It is an emboldening message to those who seek to censor and control the media through violence.

According to CPJ, at least 324 journalists have been silenced through murder worldwide, over the last 10 years. However, in 85% of these cases, the perpetrators have not been convicted.

‘‘It is an emboldening message to those who seek to censor and control the media through violence,’‘ the report says.

The Impunity Index calculates the number of unsolved murders over a 10-year period (September 1, 2008 and August 31, 2018) as a percentage of each country’s population.

Countries with five or more unsolved cases for the period are included.

ALSO READ: CPJ calls on Somalia to investigate the killing of a journalist

The other countries on the list include Syria, Iraq, Philippines, Afghanistan, Mexico and Colombia. Pakistan, Brazil, Russia, Bangladesh and India also make the list.

According to the Impunity Index, most of the victims are local journalists. The index also noted that impunity was fuelled in states with instability caused by conflict and violence by armed groups.