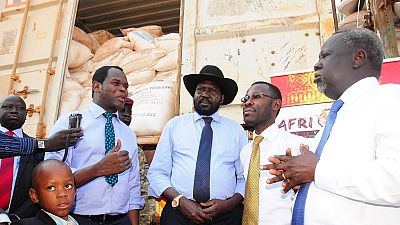 South Sudan plunged into war two years after independence from Sudan in 2011 when a dispute between Kiir and then vice-president Riek Machar erupted into armed confrontation.

More than 50,000 people have been killed in the violence, and more than two million have been forced to flee their homes.

On Thursday in Juba, a National Security official who did not give his name told reporters that the release of the prisoners was in line with the peace deal signed in September in the Ethiopian capital.

However, according to a Reuters witness, the five men who were freed did not appear to be among the senior members of the main rebel faction led by Riek Machar, formerly the vice president of South Sudan.

Under the peace deal signed by the government and several rebel factions, senior officials of those factions, political detainees and prisoners of war should be released.

Will the peace deal hold?

There has been significant confusion recently over the fate of detainees, though the issue has long been a sticking point in successive peace deals that have failed to end the war.

Some of the men who are still detained by the Juba government have been sentenced to death, including Machar’s former spokesman James Gatdek Dak.

On Oct. 1 the president’s spokesman, Ateny Wek Ateny, told local broadcaster Radio Tamazuj that all political detainees had been released, under the terms of a separate agreement.

On Oct. 19, the International Committee of the Red Cross (ICRC) said it had facilitated the release of 24 detainees freed by the government.

ICRC which was agreed by the peace parties as the supervisor of the release of detainees and prisoners of war, did not accompany the five released on Thursday.

On Oct. 21, opposition leader Riek Machar asked president Kiir to release all political detainees and prisoners of war, adding that a conducive environment for the implementation of the revitalised agreement is needed.