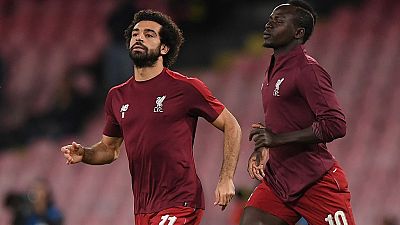 Senegal’s Sadio Mane and Egypt’s Mohamed Salah have been nominated for the prestigious Ballon d’Or football trophy that is awarded to the best player in the world by France Football magazine.

Salah and Mane were nominated after their record breaking season with English club side, Liverpool that saw them reach the Champions League final that they lost to Real Madrid.

While Salah scored 44 goals, including smashing the premiership goal scoring record with 32 goals, Mane scored an equally impressive 20 goals, netting in every knockout round of the European champions league.

Salah, will be hoping that the third time is the charm, having lost out to Croatia and Real Madrid midfielder Luka Modric for the FIFA Puskas award and the UEFA best player award for the year 2017/2018.

Modric, who beat Salah and Ronaldo to both awards was also named among the list of 30 players nominated for this year’s Ballon d’Or trophy.

Ronaldo and Argentina’s Lionel Messi, who each have won the award a record five-times, are also on the list announced on Monday.

A panel of journalists select the winner of the Ballon d’Or,which was first established in 1956 and will this year feature a women’s award for the first time, to be decided from a shortlist of 15 players.

20-year old Malian midfielder, Amadou Haidara, who currently plays for Austrian club FC Red Bull Salzburg was the only African named in the inaugural Kopa Trophy award which recognises talented players under the age of 21.

The winners of the prestigious men’s and women’s awards will be announced at a ceremony in Paris on Dec. 3.

"One planet summit" kicks off in Paris

A Senegalese hopeful wisely awaits his time in Europe

"One planet summit" kicks off in Paris

A Senegalese hopeful wisely awaits his time in Europe