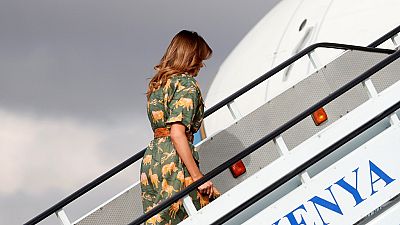 United States president Donald Trump applauded the country’s first lady for ‘doing a tremendous job of representing our country’ on her first international solo trip, that took her to the African nations of Ghana, Malawi, Kenya and Egypt.

Trump, who has had a somewhat controversial relationship with the African continent since coming to office in 2016, had been keenly following Melania’s trip in Africa.

ALSO READ: Africa and Melania loving each other beautifully – Trump

As reviews of her trip to the African continent continue to be written, Trump shared his own where he said the ‘people of Africa loved and respected her everywhere she went’.

Meeting those children and understanding their different way of life is why I wanted to travel here.

‘‘Melania told me all about her trip in great detail and I’m so proud of the job she’s doing on behalf of children everywhere,’‘Trump said.

Melania arrived in Africa on her first solo trip on October 1 with the aim of partnering USAID to advance the activities of her “Be Best” campaign aimed at children and women empowerment efforts.

‘‘She works so hard and does it all out of love,’‘ Trump added.

Here’s a quick recap of Melania’s trip across the African continent.

On her first stop, Melania visited children at a healthcare center with the country’s First Lady before laying a wreath at at a slave fortress on the coast of Ghana.

The 17th century Cape Coast castle, now a monument, has attracted world dignitaries including America’s first black President Barack Obama and his family, who also shared their emotions at the site.

In Malawi, Melania visited the Chipala Primary School where she donated textbooks, balls and supplies to the pupils and teachers.

“Meeting those children and understanding their different way of life is why I wanted to travel here,” she said after the school visit.

Elephants and a pith helmet in Kenya

The 48-year old first lady had a visually rich trip in Kenya, feeding baby elephants at the David Sheldrick Wildlife Fund, before taking a short safari in the Nairobi.

The white pith helmet she wore as she passed by zebras, giraffes and other animals in Nairobi National Park made headlines, as Africans accused her of being insensitive by wearing the hat that was often donned by colonisers of tge continent.

Pyramids and the Great Sphinx in Egypt

Melania wrapped up her eventful trip in Egypt, where she met president Abdel Fattah al-Sisi and his wife Entissar al-Sisi, before touring the Pyramids and the Great Sphinx.

She also addressed a press conference where she spoke on a range of issues including her husband’s reputation in Africa and her fashion sense.

“I wish people would focus on what I do, not what I wear,” Melania said, even though it was difficult not to be drawn to her outfit at the Pyramids.

“I wish people wold focus on what I do and not what I wear,” FLOTUS tells me, wearing this. (photos by Saul Loeb/AFP/Getty) pic.twitter.com/6KVWvYGNez

The first lady was wearing cream wide-legged slacks, a white shirt, with a black necktie, with a Ralph Lauren jacket over her shoulders. The outfit was topped with a white Panama-style straw hat from the French fashion house of Chanel.

Living in shadows: Life as a gay in Dakar

Living in shadows: Life as a gay in Dakar