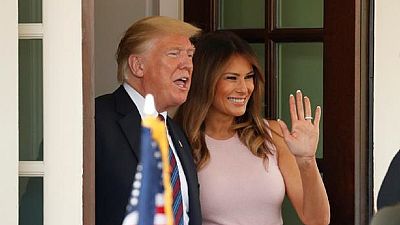 President of the United States Donald John Trump has declared that the love between his wife Melania and the African countries she is visiting is mutual.

In a tweet posted on Thursday Trump wrote: “Our country’s great First Lady, Melania, is doing really well in Africa. The people love her, and she loves them! It is a beautiful thing to see.”

Melania on Thursday arrived in Malawi on the second-leg of her four-nation tour. She flew in from Ghana where she spent two days visiting a medical facility and touring a former slave castle in Cape Coast.

She also held talks with the Ghana’s First Lady Rebecca Akufo-Addo and interfaced with staff of the United States embassy in Accra. She is due to visit Kenya and wrap up her tour in Egypt.

This is her first solo international tour as First Lady. She is partnering with USAID to promote her “BE BEST” campaign aimed at children and women empowerment.

Trump has yet to announce a visit to the continent since he took office in January 2017. He has, however, succeeded in dominating headlines on the continent.

First, over an allegation that he had referred to Africa and Haiti as “shitholes” during a discussion on immigration. Trump rejects the report that he used the word.

More recently when he tweeted that he had ordered a probe into killing of white farmers in South Africa. Pretoria hit back strongly stressing that Trump was speaking from an uninformed position.