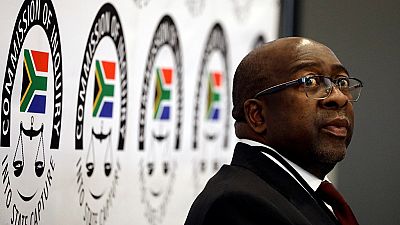 South Africa’s Finance Minister Nhlanhla Nene has been giving evidence on Wednesday at an inquiry into influence-peddling. His testimony has so far revealed new details about the role of former president Jacob Zuma and his friends, the Guptas.

According to him, he was fired by former president Jacob Zuma for refusing to approve contracts that would financially benefit the Gupta family, friends of Zuma accused of corruption.

The Gupta family and Zuma have denied any wrongdoing and say the allegations are part of an orchestrated witch hunt.

Nene is a pivotal figure in a probe into the three Indian-born Gupta brothers, who built a business empire during Zuma’s nine-year tenure only to see it disintegrate as the scandal-plagued leader was forced out by his own party in February.

Zuma fired Nene in December 2015 and replaced him with largely unknown lawmaker Des van Rooyen, sending markets into a tailspin before Zuma appointed investor-friendly Pravin Gordhan as his third finance minister in the space of four days.

Nene has never given details about a dramatic period that revealed to global investors for the first time what was at stake in a battle within the ruling African National Congress over the influence of the Guptas.

The long-awaited inquiry into allegations the Guptas used ties to Zuma to win billions of rand’s worth of government contracts opened last month with witnesses testifying that the brothers had tried to bribe them or had threatened them.