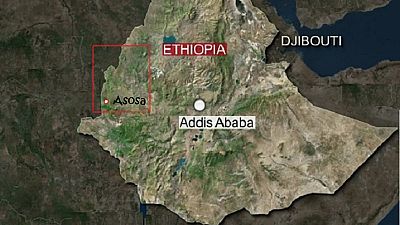 The latest round of deadly ethnic violence in Ethiopia is said to have hit the western Benishangul-Gumuz region – specifically in the Kamashi zone. The incident is said to have happened last week.

Turkish media outlet, Anadolu Agency, AA, cited a government official as confirming that 20 people had been killed with about 60,000 others displaced.

“The number of deceased could be much higher because some of the clashes occurred in far-off rural areas,” head of Oromia regional state communication bureau, Negeri lencho, told local press. He added that the perpetrators had also destroyed properties.

Reports said the cause of the clashes was after officials of Benishangul-Gumuz were reportedly murdered by unidentified gunmen. The assailants are said to have been operating disguised like the Oromia – based, Oromo Liberation Front, OLF.

OLF is an erstwhile terrorist group that was de-listed months back by the federal government. Originally operating from Eritrea, the now ex-rebel group agreed to return from exile and participate in peaceful politics.

Ethiopia’s overall internal insecurity has directly contributed to growing internally displaced figures which indicate that the country has about 1.4 million displaced – 200,000 more than Syria, according to Geneva-based International Displacement Monitoring Center, IDMC.

Ethiopia’s figures included: 171,000 persons displaced by floods in four regions. New conflict in West Guji and Gedeo zones, along the border between the Oromia and Southern Nations, Peoples and Nationalities (SNNPR) regions, triggered more than a million new displacements.

Intercommunal violence along border areas of the Oromia and Somali regions also played a role. Going by the figures, the overall number of new displacements increased sharply compared to the 213,000 reported during the same time period last year.

Somali regional state experienced its share of violence as government went in to oust former leader, and more recently in Oromia’s Burayu on the outskirts of the capital, Addis Ababa.

Benishangul-Gumuz region has had its fair share of violence in the first half of this year with 10 people being killed in its regional capital, Asosa.

The region is multi-ethnic and hosts the country’s flagship hydroelectric project, the Grand Ethiopian Renaissance Dam, GERD. It will be the biggest dam in Africa after its completion. It is however the focus of a diplomatic back and forth between Ethiopia and Egypt as well as Sudan.