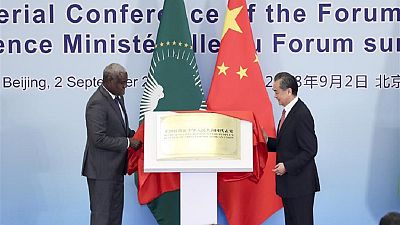 Chinese media outlet Xinhua.net has reported that the African Union has finally opened its representational office in the capital, Beijing.

The event happened on September 2, 2018; a day before the Forum on China – Africa Cooperation, FOCAC, officially kicked off.

Even though it was the third meeting for Heads of State and government, Foreign Affairs ministers met for the seventh FOCAC ministerial conference.

AU Commission chairperson, Moussa Faki Mahamat joined the Chinese State Councilor and Foreign Minister Wang Yi to unveil a plaque at the inauguration ceremony of Representative Mission to the People’s Republic of China for the African Union.

The Chinese government in February 2018 said it was ready to support a plan by the A.U. to establish a representational office in Beijing.

This followed a visit by Mahamat to China between January 8 – 9, 2018. “China welcomed the planned establishment of an African Union Office in Beijing to ensure effective and timely follow-up of the China-Africa partnership, and committed to support the setting up of this Office.

“This representation will also support the work of the African Group of Ambassadors in Beijing, to ensure alignment with African Union positions. It should be noted that China had established a Permanent Mission to the African Union, since 2015,” his communique read in part.

At the time, the A.U. chief added that China had agreed to continue supporting institutional capacity at the African Union. Plus its plan to continually support A.U. infrastructure, including the New Conference Centre and the renovation of other buildings in the African Union compound.

A topical issue at the time between the two groups had been the report by French newspaper Le Monde alleging that China was spying on the A.U. headquarters in Addis Ababa. The reports have been categorically rubbished by China and the A.U. as false and incapable of straining relations.