A Nigerian court on Friday released a journalist on bail after he was arrested following the publication of an article that cited a confidential letter from the chief of police, the reporter’s newspaper said.

The newspaper said reporter Samuel Ogundipe was arrested on Tuesday for refusing to reveal the source of the letter, which identified who was blamed for a blockade on parliament last week by members of the Department of State Security.

Opposition lawmakers said the blockade was an attempt to intimidate its leaders but the presidency condemned the move and the acting president fired the head of the security agency.

“Mr Ogundipe was released on Friday morning after he was granted bail,” said the newspaper in a tweet, adding that his case had been heard a magistrate’s court in the capital, Abuja.

The newspaper did not state when the next court hearing would take place.

Nigerian police said on Thursday Ogundipe was being prosecuted in relation to “theft and unlawful possession of restricted and classified documents” capable of compromising state security.

It said the charges against him were related to the official secret act and a cyber crime act.

The government led by President Muhammadu Buhari – a former military ruler – has frequently been accused of constricting press freedoms, which it has denied, and security services have often detained reporters. Nigeria ranks 119th out of 180 nations in Reporters Without Borders’ World Press Freedom Index.

Amnesty International and the Committee to Protect Journalists have called for all charges against him to be dropped. They also called for him to be freed, prior to his release on bail.

During the blockade, armed men wearing the black uniform of the Department of State Security stood at the gates of parliament in Abuja and were later joined by police officers blocking entry for up to an hour – evoking memories of the decades when the security forces held sway over politics.

The head of Nigeria’s state security service, Lawal Daura, was fired by Osinbajo hours after the blockade.

Ogundipe reported in the Premium Times that Idris had written to Osinbajo – in charge while Buhari takes a 10-day holiday – to say an investigation had concluded that Daura had been behind the blockade.

The government has not responded to contents of the story.

Earlier this week the DSS announced the appointment of a spokesman to improve transparency in the way the security agency operates.

And, on Tuesday, Osinbajo ordered the overhaul of a special unit following allegations of repeated human rights violations that came to prominence in a social media campaign. 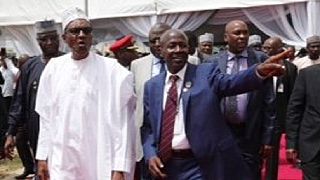