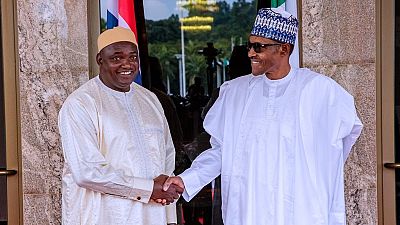 Nigerian president Muhammadu Buhari has lauded his Gambian counterpart, Adama Barrow, for bringing stability to the tiny West African nation following the events that led to his coming into office.

Buhari in underscoring the importance of stability said it had a ripple effect on the wider national agenda of every nation. Buhari on Wednesday received Barrow at the presidency in Abuja where the two held bilateral talks.

“The best route to national development is stability. When a country is not stable, you spend most of your financial resources on security. That is the money that should have gone into education, infrastructure, and generating employment for the people, particularly youths.”

He congratulated President Barrow for stabilizing The Gambia after his emergence, following the impasse caused by his immediate predecessor, Yahya Jammeh, who initially refused to vacate office, after losing the presidential election in December, 2016.

Barrow came into office at a time his immediate predecessor Yahya Jammeh was virtually threatened out of office by regional bloc, ECOWAS.

Jammeh – now exiled in Equatorial Guinea – lost and conceded in polls of December 2016 only to unilaterally cancel the results and order a rerun citing irregularities.

After failed mediation led by Buhari and other leaders, ECOWAS deployed a force to oust Jammeh upon expiration of his term in January 2017. He agreed to fly to Malabo according to him in the interest of peace and to avoid bloodshed.

This is the second time Barrow has paid a courtesy call on Buhari. On his part Barrow congratulated Buhari on his new regional position having been elected chairperson of ECOWAS. He reiterated his gratitude for the role Buhari played in returning the Gambia to the path of constitutionalism.