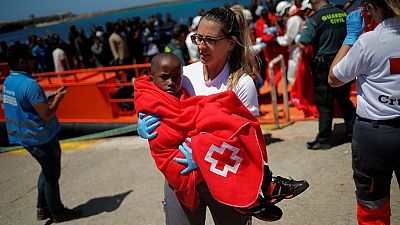 Spanish coast guard on Wednesday rescued 70 migrants including twelve children at the Strait of Gibraltar from three different dinghies.

Spain’s Maritime Rescue Service said on its Twitter feed said that 62 of them where from Sub-saharan Africa and eight from Morocco.

The migrants where brought by the coast guard to the Southern Spain port of Tarifa were they were assisted by Red Cross members.

Irregular immigration across the Mediterranean has fallen dramatically, with about 45,000 people making it to Europe across the sea this year compared to over a million in 2015.

The boat was denied safe port by Italy and Malta, following last month’s 629 migrants which Spain accepted to dock on another charity rescue boat, the Aquarius.