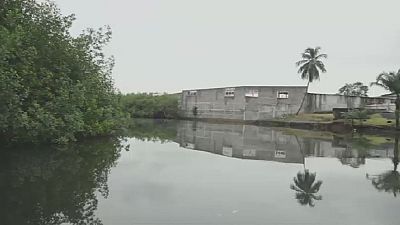 The foundations of a house on the bed of a river and a flooded road. Nature does not hesitate to take back its rights in Libreville, Gabon where rapid urbanization is threatening the fragile natural environments that surrounds this city.

But despite these, several new projects are springing up in this suburb located north of Libreville. Developers do not seem to respect the regulations of semi-protected natural areas.

“Logically, we should not be in a situation where people are building in places that are simply not suitable for buildings’‘ said, Magloir Désiré Mouganga, a scientist with the National Agency of National Parks in Gabon.

Logically, we should not be in a situation where people are building in places that are simply not suitable for buildings.

Huge structures stand on several muddy stretches in Libreville, where mangroves once grew. The destruction of the latter also leads to an increase in natural disasters including floods. Médard Obiang Ebanega, is a Geographer at the Graphic and Cartography Laboratory of Omar Bongo University in Libreville.

“Today, people are building on riverbeds, people are destroying wetlands such as mangroves, the risk is to suffer more and more natural disasters, and end up with land conflicts”, Obiang noted.

Most mangroves are located on the outskirts of Libreville, which continues to grow while surrounded by three protected areas. Environmental activists are worried about this deforestation. The mangrove is an essential ecosystem against rising waters and for the preservation of marine life.