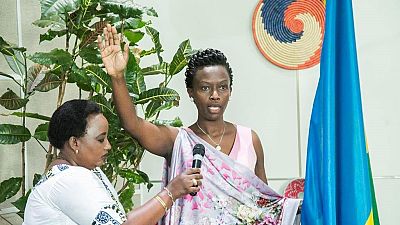 The 45 year old economist was elected by the council of the city of Kigali with 146 votes against 32 votes in favour of her challenger.

CONFIRMED: Marie Chantal Rwakazina is the new Mayor of CityofKigali after being overwhelmingly voted by the council, garnering 146 votes while Herniette Murekatete managed to get 8 votes. #MayorElections pic.twitter.com/cuhTa9QHGz

Rwakazina represents the Nduba sector of the city. She worked with the Rwanda Association of Local Government (RALGA) between 2008 and 2013.

Rwakazina is the second woman to hold the position within this particular term, following the resignation of Nyamurinda who in turn replaced Monique Mukaruliza, who had been appointed High Commissioner to Zambia last year.

Rwakazina is a development expert who has been working with the United Nations Development Programme, where she was coordinator of UN support programmes in the country. She also lectured economics at the University of Rwanda.