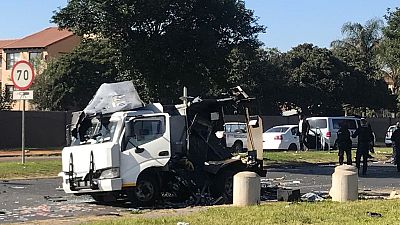 Robbers armed with assault rifles and explosives blew up two armoured cash-carrying vans in Johannesburg this week in a brazen broad-daylight incident that underscored South Africa’s reputation for violent crime.

In dramatic cellphone footage of the incident recorded by a motorist, the assailants seal off a block in the suburb of Boksburg, east of Johannesburg’s commercial centre, before calmly detonating explosives under the cash vans.

Three large explosions are heard, with plumes of grey smoke shooting up into the air. There are also rapid exchanges of gunfire before and after the blasts, although it is not clear where the shots were coming from.

The assailants, who numbered around a dozen, then load sacks into at least two get-away cars before speeding away. Motorists caught up in the shoot-out are seen pulling U-turns across the road to escape the scene.

Police said two security guards in the cash vans were injured in the incident and were treated in hospital. They also said some of the robbers were arrested after being tracked by helicopter to a run-down industrial park.

Security experts quoted in South African media said the way the assailants behaved and handled the weapons suggested they had military backgrounds.