'Ramadan is sweeter with Salah': Egyptians sell Ramadan products in his name 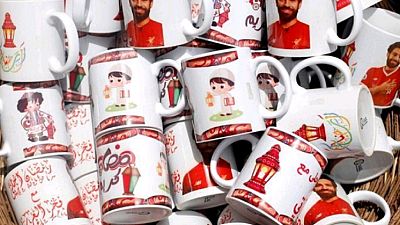 Egyptian soccer star Mohammed Salah set a scoring record this season that helped Liverpool clinch fourth place in the Premier League. Now pictures of his bearded face are boosting sales ahead of the Muslim holy month of Ramadan.

Manufacturers have plastered his image on traditional Ramadan products ranging from pillows to lanterns “famous” and paper cut-outs as they try to cash in on his success to offset economic hardships caused by the government’s financial reforms.

“The Mohamed Salah lantern is the highest selling lantern this year,” said Essam, a shopkeeper, who did not give his last name. Other shopkeepers at a market in Cairo’s Sayeda Zainab neighborhood said “Salah mania” was also helping them sell.

The Mohamed Salah lantern is the highest selling lantern this year.

Salah scored 44 goals in 51 games in his debut campaign and last week won the Football Writers Association award. Next month, the 25-year-old will lead Egypt’s first team for 28 years at the World Cup.

“Mohamed Salah is a role model for all Egyptians at the moment,” said Omnia, a shopper. “All of Egypt loves Mo’ Salah, as they call him in England.”

Demand for food and traditional items soars during Ramadan, a month whose start date depends on the sighting of a crescent moon.