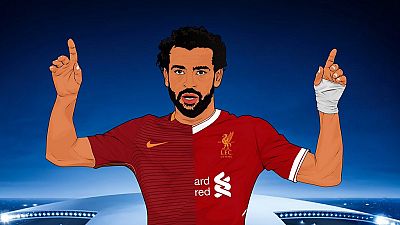 Italian side AS Roma on Tuesday wished its former player Mohamed Salah good luck in the Champions League final slated for Kiev.

The well-wishing came hours after Roma were eliminated by Salah’s Liverpool. Liverpool lost 4 – 2 at the Stadio Olympico but had done enough in the first-leg winning 5 – 2 at Anfield.

Salah was instrumental in the Anfield victory scoring twice and providing an assist. The Egyptian international refused to celebrate both goals against his former side.

Roma’s Twitter handle posted a photo of Salah in split Liverpool and Roma shirts with the message: “It hurts so much that AS Roma’s incredible dream of going all the way to Kiev is over but you’ll be there in your new colours. Good luck in the UCL final Mo Salah.”

Liverpool on the night took the lead through Senegalese skipper Sadio Mane, Roma got level after an own goal before Liverpool restored their lead with a Wijnaldum header.

Roma went on to score three times, the third coming on the 93rd minutes and setting up a nervy closing stages of the game. The Champions League final will be between Liverpool and Real Madrid.

It hurts so much that #ASRoma’s incredible dream of going all the way to Kiev is over but you’ll be there in your new colours.