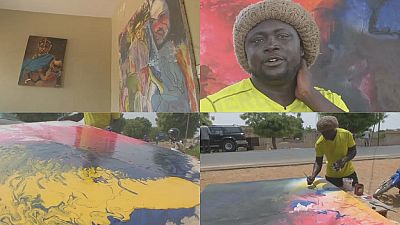 Immigration, cultural diversity and identity are at the heart of this work by Senegalese artist, Alioune Badara Sarr whose painting will be exhibited at this year’s Dak’Art biennale opening on May 3.

Finished in 2017 ‘Metissage Frontalier’ which can be translated as ‘Border Crossing’ or ‘Border Crossbreeding’ is the product of Sarr’s experience as a migrant.

Painting outside his house whilst greeting residents that pass by all day on the main road, Sarr explains that the painting’s bold primary colours of blue, red and yellow represent cultures, identities and personal stories and their position on the canvas is how they interact in the world.

For me, the Dakar biennale is the mirror of Africa, its a whole dream for all artists... So being named and being cited amongst those who are exposing for the 'In', its a real pride.

“I told myself, I will try to work on this painting, to question the painting, and try to work with a maximum of materials on there and the fact that the paints intermingle whilst others repel each other is a bit like what’s going on in this world, this guy doesn’t like this guy, and this guy accepts the other guy and its the same thing that is going on here with the painting,” said Sarr.

After studying at the fine art school in Dakar he travelled to Brest, in France, to do his masters at the Ecole Europeene des Beaux arts.

He says that at first, when he arrived in France, he began collecting stories from other travellers and migrants, but in the end he chose to concentrate on his own story in his paintings.

“I felt justified working on that subject since I myself had migrated. And I set off with my stories, and all the interviews I did with people who had left, I put that aside, and I thought, it’s more justifiable to work on myself,” he said.

In his early life Sarr was a shepherd in Diofor, 140k South of Dakar.

Whilst tending to his flock he said he would spend his hours of solitude questioning everything. It was that search for answers that led him to art.

His early paintings are more classical, more tame than the bolder abstract work he does today.

Alioune said that was because African art academies don’t focus on contemporary art and have very few museums or exhibition centres.

In the end, he said, he felt hemmed in and restrained and decided to study in France where he blossomed by discovering other artists, learning about pigments and experimenting with new techniques.

Sitting by the giant Kapok tree in his village, Sarr says his paintings are like his life, a melting pot of experiences and cultural identities – old and new.

“When I create there is obviously a certain influence from my culture influences, which I have not forgotten, even if I want to forget it its not possible. I was a shepherd for a long time, I was cradled by all the forests in my region, I was cradled by a culture of mutual support and all that and it gave me a human side that comes through in my works and I see that as an asset. Going to Europe allowed me to see that there is another way to live and to deal with society,” he said.

Born in 1983, Sarr is a painter and a sculptor, and also does installations.

His website describes him as a cultural nomad whose work interprets his idea of the world built between two banks of the Atlantic.

“The Dakar biennale, for me its the mirror of Africa, its a whole dream for all artists… So being named and being cited amongst those who are exposing for the ‘In’, its a real pride,” he said.

Up to 75 artists will showcase their work at the 13th Biennale of African Contemporary Art.

The theme this year is ‘The Red Hour’ for what is known as the ‘In’ exhibition. The ‘Off’ will be made up of 300 private installations.

Held every two years, Dak’Art gives African and diaspora artists an opportunity to engage with each other and audiences from around the world.