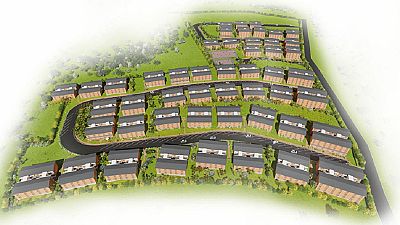 About 1,000 families are readying to move out of a slum in the Rwandan capital as construction starts on a controversial city masterplan that aims to build Kigali in a planned way.

Ground was broken on the new $11.7 million Savannah Creek housing project in Busanza, some 13 km (8 miles) south of the city center, on March 31, Denis Karera, head of the private construction firm, told the Thomson Reuters Foundation by phone.

“We are talking about a housing estate that has all the infrastructure … roads, public lighting, sewage management treatment system, a school, public center and a market,” said Bruno Rangira, a spokesman for the city authority.

Everyone will be moved.

“Everyone will be moved.”

Africa has the fastest growing cities in the world, with 40 percent of its one billion people in towns and cities. But a lack of urban planning means sprawling slums are mushrooming alongside expensive housing and luxury flats.

Residents will be moved out of Kangondo slum, nestled between high-end residential areas in northern Kigali, popularly known as Bannyahe, meaning “Where are the toilets?” in the Kinyarwanda language, as people have to share pit latrines.

Their shacks will be replaced with new buildings in line with urban planning regulations.

Rangira said the relocation plan has faced resistance from landlords who want cash compensation instead but added that the city is working within the law.

Landlocked Rwanda has ambitions to be a tech-savvy logistics hub mirroring Singapore’s rags-to-riches rise, boasting years of solid economic growth and pristine streets, although critics say gains have come at the cost of political freedom.

“What we are doing now is mobilization for the master plan,” Rangira said, referring to the Kigali city master plan, which was introduced in 2013 to build an environmentally sustainable city and reduce the risk of landslides, a common hazard.

The ambitious plan was praised by urban planners for its focus on sustainable land use, and won several awards, although its strict implementation drew fire from human rights groups.

Kigali’s population is expected to almost triple to about 3 million people by 2030.