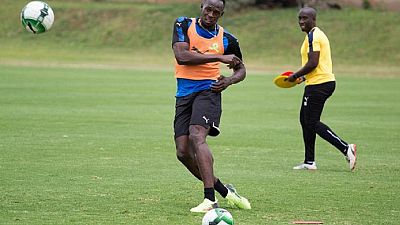 Usain Bolt is being called out by his fans online after he announced that he will be playing for the Soccer Aid World XI, which will play against an England team led by musician Robbie Williams, who co-founded Soccer Aid.

Usain Bolt who is an ardent Manchester United fan had hyped the hopes of many of his fans across the globe on Sunday when he posted a video saying he had signed for a football team.

I've signed for a football team! Find out which one this Tuesday at 8am GMT ? pic.twitter.com/iFTlWxfy7x

Mamelodi has trained at both Dortmund and the Sundowns.

Football will never be the same. Find out tomorrow 8am GMT! ?? #Sundowns pic.twitter.com/nifRZFR62s

Rather than a top football club however, Usain shocked his fans with the announcement that he is joining stars and football legends brought together by Soccer Aid to raise money for global children’s charity, UNICEF.

Excited to announce that I will be playing in socceraid for UNICEF_uk 2018 at Old Trafford on Sunday 10th June. Make sure you're ready robbiewilliams! ⚽️? pic.twitter.com/t2sDB1iLP8

This year’s match that will be played on Sunday June 10th at Old Trafford, the home of Bolt’s favorite club, Manchester United and Bolt says it brings him a step closer to hi dream.

“It is my dream to make it as a professional footballer, so to be able to step out onto the pitch at Old Trafford in June, and play against some of football’s biggest legends is going to be remarkable,’‘ Bolt said.

.UsainBolt and RobbieWilliams to go head-to-head at Old Trafford this summer… all in the name of charity, of course!

Many fans still felt let down by the charismatic star who has repeatedly expressed his desire to play professional football after retiring from athletics following the 2017 World Championships, after a career spanning three separate Olympic Games.

Everyone who thought you meant a professional team… pic.twitter.com/rr7zhWLGU3

Masandawana and Usain hyped South Africa for this. Its a good cause but I mean ? I feel cheated pic.twitter.com/WKkG7U4PGl

The charity match has previously featured stars including Will Ferrell, Woody Harrelson, Mike Myers and Niall Horan and footballing royalty such as Maradona, Zinedine Zidane, Luis Figo and Ronaldinho, who have helped Soccer Aid raise £24 million since its launch in 2016. 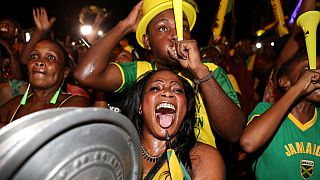