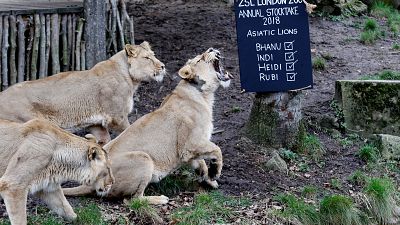 Two African lions rescued from war zones in Iraq and Syria have found a permanent home at Lion’s Rock, a big cat sanctuary in South Africa’s Free State province on Monday. There arrival in South Africa comes after months of resting in Jordan where they recuperated from physical and psychological trauma.

The lions were coaxed with mouthfuls of meat into metal crates today before being loaded into a cargo truck to take them to Jordan’s international airport.

The animal rights group Four Paws International rescued Saeed and Simba in daring warzone operations in 2017 from Magic World outside in Syria’s Aleppo, and the Mosul zoo in Iraq.

? ? ? ? ? ☀
These are the last pictures of lions Simba and Saeed in Jordan. Next stop: our Big Cat Sanctuary LIONSROCK in South Africa. pic.twitter.com/JHvBpTG2Jc

BBC reports that the rescued lions were trained for weeks in preparation for their unsedated, 33-hour journey by plane and truck to the 1,250 hectare sanctuary.

As the lions are young, aged two and four, their handlers decided to relocate them so they could meet lionesses and start their own prides, it further reports.

Four-year-old Simba was one of two animals found still alive despite appalling conditions in a private zoo in Mosul last February. Most of the others died of starvation or were killed by bombs.