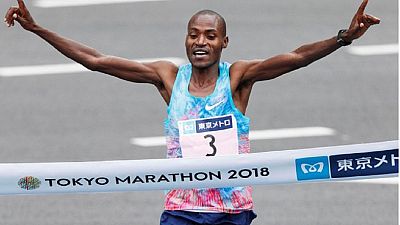 31 year old Chumba, who previously won the event in 2014, sprinted clear from the lead pack near the 36-km mark and held off a late charge from Shitara to cross the line in two hours, five minutes and 30 seconds.

Shitara was 41 seconds adrift as he finished ahead of Kenya’s Amos Kipruto, who timed 2:06:33.

The defending champion, Kenyan Wilson Kipsang had earlier dropped out of the race after just 15 kilometers.

In the women’s category, Ethiopia’s Birhane Dibaba and Ruti Aga claimed the top two positions in 2:19:51 and 2:21:19, respectively.

American Amy Cragg came across in 2:21:42 to take third spot. Hiroko Yoshitomi was the first to cross the line among Japanese women, claiming sixth place in 2:30:16.