Sudanese authorities released more than 80 political prisoners from jails in the capital Khartoum, a week after the African country appointed a new security chief.

A Reuters reporter said he had seen about 40 prisoners released from the main prison by Sunday evening and that some prominent opposition leaders were still being held there.

The deputy head of the main opposition party, Fadlallah Burma, was among those released.

A presidential adviser had earlier said in a statement that President Omar Hassan al-Bashir had ordered more than 80 political detainees to be released.

All of them were arrested last month after protests about high prices and tough economic conditions that turned violent.

Families celebrated in front of the jails on Sunday, with some chanting “freedom, freedom” and singing national songs.

A group of people started a sit-in outside one of the prisons, saying they would not leave until all the political prisoners were freed.

Opposition parties welcomed the release of their members even as they called for the cancellation of the austerity measures and the annulment of laws that restrict freedoms.

The United States in October last year lifted 20-year-old sanctions on Sudan, prompting calls from the International Monetary Fund for the African country to float its currency among other measures that it said could help its economy recover.

Sudan rejected floating the currency but devalued it in January and cut wheat subsidies, sending the pound’s value plummeting on the black market and causing a doubling of bread prices that led to January’s demonstrations.

The weak black market rate of the pound has also forced authorities to slash the rate at which banks can trade dollars.

Sudan’s economy has been struggling since the south seceded in 2011, taking with it three-quarters of what had been its oil output.

Opposition groups have accused the president of jailing dissidents and censoring the media.

Bashir has remained in power for more than a quarter of a century, weathering rebellions, economic crisis and an indictment by the International Criminal Court on suspicion of having orchestrated war crimes in Sudan’s Darfur region. 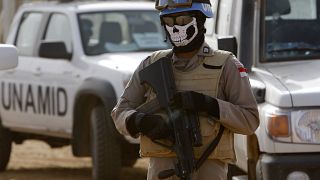 Concern for civilians as UN peacekeeping mission in Darfur folds

Concern for civilians as UN peacekeeping mission in Darfur folds