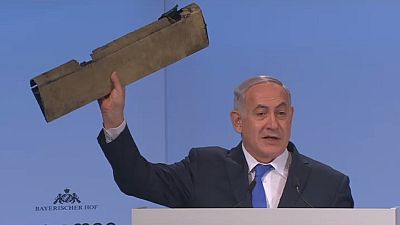 Prime Minister Benjamin Netanyahu said on Sunday that Israel would act against Iran if needed, not just its allies in the Middle East, reiterating that Tehran was the world’s greatest threat.

“Israel will not allow Iran’s regime to put a noose of terror around our neck. We will act without hesitation to defend ourselves. And we will act if necessary not just against Iran’s proxies, that are attacking us, but against Iran itself,“Netanyahu said.

Addressing the Munich event for the first time, Netanyahu urged the U.S. and European officials gathered to counter Iran immediately. He held up a piece of what he said was an Iranian drone after its incursion into Israeli airspace earlier this month.

Israel will not allow Iran's regime to put a noose of terror around our neck.

In response Iran’s Foreign Minister said the shooting down of an Israeli jet after it bombed an Iranian site in Syria had shattered Israel’s “so-called invincibility”.

“Once the Syrians have the guts to down one of its planes it’s as if a disaster has happened,” Zarif said.

Zarif retaliated that Netanyahu’s holding up of what he said was a drone was a “cartoonish circus” that did “not even deserve the dignity of a response.”

Meanwhile around 50 people took part in a protest against the Iranian regime organised by the National Council of resistance of Iran on Munich’s Stachus square in close proximity to the conference’s venue, timed to coincide with Zarif’s speech.

The Munich Security Conference is marketed as a major global forum that has for the past 5 years brought together world decision makers to engage in an intensive debate on current and future security challenges.