Tension in Kenya ahead of Odinga's banned inauguration 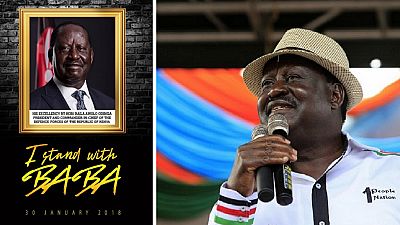 Kenya’s main opposition coalition the National Super Alliance (NASA) says it will press on with a planned inauguration banned by the authorities.

There is tension in the capital Nairobi where the event is scheduled to take place. Police have declared the venue – Uhuru Park – as a “out–of-bounds” but have asked citizens to go about their normal duties.

The Interior Minister on Monday dispelled a ‘fake’ directive that said people were to stay home on Tuesday. A NASA press statement issued on the eve of the event said all was set for the ‘swearing in of its leaders.’

We nonetheless wish to put the Jubilee administration on notice that we will accomplish our mission come hell or high water. We advise our supporters to come prepared to stay until our mission is accomplished.

NASA CEO Norman Magaya: We have no intention of changing our venue the only option is Uhuru Park…When it comes to the swearing in, we are doing everything as set out in the constitution because as I said we are swearing in the pres. of the republic of Kenya.#NewsCenter pic.twitter.com/VfGOTXjUpn

“The National Super Alliance wishes to inform supporters of the nationa at large that the swearing-in of Rt. Hon Raila Amolo Odinga and H.E. Stephen Kalonzo Musyoka as President and Deputy President of the people respectively is on as has been announced earlier.

“All plans are in place to ensure this event is conducted peacefully and successfully at the Uhuru Park in Nairobi from 8 a.m.

The statement signed by NASA CEO, Norman Magaya added that they intended to hold a peaceful event as allowed by law advising attendants to avoid confrontation with police officers at all costs.

“We nonetheless wish to put the Jubilee administration on notice that we will accomplish our mission come hell or high water. We advise our supporters to come prepared to stay until our mission is accomplished,” the statement concluded.

The swearing-in of Raila and Musyoka was initially scheduled for December 12 in Mombasa, one of the opposition stronghold. It was postponed to January 30 citing organizational issues.

The Alliance at the time said it was aware that the postponement will be a disappointment to Kenyans who were looking forward to the day.

Tension has been high in the East African country since after the Supreme Court nullified the results of a presidential poll held in August 2017 and called for a re-run that Odinga boycotted calling for reforms in the electoral commission.

Kenya’s attorney Genral Githu Muigai had also warned of treason charges if the opposition coalition went ahead with the swearing both Raila Odinga as Presinet and his Deputy Kalonzo Musyoka.