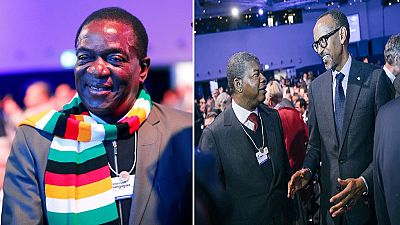 African political and business leaders have joined other heads of state from the rest of the world as well as global business executives at the World Economic Forum in Davos, Switzerland.

The leaders have taken to social media to share their messages and objectives with their citizens back home.

Zimbabwe’s Mnangagwa said his ‘message is simple’. He will be telling the delegates at the forum that ‘the new Zimbabwe is open for business, looking to the future and ready to take its place among the family of nations’.

I am here to tell the Nigerian story, how we are using new technology to drive financial inclusion. It's time to tell stories of what we are doing right and how, together, we can scale it.

Landed in #Davos for the wef. This is the first time in history a Zimbabwean president has attended. My message is simple – the new #Zimbabwe is open for business, looking to the future, and ready to retake its place in the family of nations #WEF18 #Davos2018

The South African presidency also shared updates from meetings by its delegation at the forum, led by Deputy President Cyril Ramaphosa.

Deputy President Cyril Ramaphosa in meetings with other leaders on the margins of the 2018 World Economic Forum Annual Meeting in Davos, Switzerland pic.twitter.com/j0IGDLobvQ

Cyril Ramaphosa didn't issue any statement about this, but he had an interesting meeting with the IMF today in Davos to discuss future “reforms” in South Africa pic.twitter.com/9XaWc8bH0o

Business leaders from Africa including Africa Development Bank (AfDB) president, Akinwumi Adesina are at the forum, sharing the investment opportunities that are available on the continent.

‘‘We have launched a $500 million fund to support businesses in Africa that are producing power in a decentralised way,’‘ said AfDB’s Adesina.

‘‘I am here to tell the Nigerian story, how we are using new technology to drive financial inclusion. It’s time to tell stories of what we are doing right and how, together, we can scale it,’‘ said Diamond Bank CEO Uzoma Dozie.

The forum’s programme is built around four key objectives; driving sustained economic progress, navigating a multipolar and multi-conceptual world, overcoming divisions in society and shaping the agile governance of technology.

American President Donald Trump who is expected at the forum will also meet with the incoming African Union chairperson, Paul Kagame.

National Security Adviser GEN McMaster says that at Davos, POTUS will meet with the head of the African Union, Rwandan President Paul Kagame.