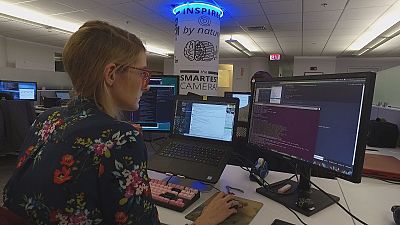 Workers across the world are increasingly aware of what many consider an existential threat to a wide array of jobs. Safe and efficient autonomous vehicles, for example, may make truck drivers obsolete in the not too distant future. At the same time, advocates of technology argue, people around the planet are finding new and often better opportunities thanks to continuing industrial innovation. The world of work is changing, from Silicon Valley to the Nile Valley, where Spotlight visited to discover how developments in agri-technology are revolutionising crop cultivation.

Once part of the desert, a camomile field near Faiyum southwest of Cairo, now provides a seasonal income opportunity for local women. Faiyum is one of Egypt’s poorest provinces, with particularly high female unemployment. Hundreds of women are employed here, and business is growing, thanks to new technologies.

“These women come from nearby villages,” says Om Said, a local entrepreneur. “There are always people there in need of work. For them, it’s means for living. With new technologies, we can deliver more product in shorter time. The drying process now only takes two days. This greatly speeds up the production.”

We, the people of the world, have got to own this new technology, so that the profits and rewards come broadly to people, rather than go to a few billionaires.

At harvest time, around 200 workers process up to 300 tons of camomile. The plants are dried in a fast and hygienic way using a solar heat collector. The technology was developed by local researchers a few years ago and since greatly enhanced, spinning off a business creating high- and low-level jobs across Egypt, according to Prof. Wael Abdelmoez, and environment and energy expert and founder of R&D Tech.

“High level, which covers the engineers and PhD holders who are already working on the design and supervision of the manufacturing of solar driers; the labourers, who are working running the facility itself; and the females, who are working in the field itself, whose numbers have increased dramatically”.


The Future is Green

Green jobs are on the rise in a region that long relied on cheap fossil fuels. Amid climate change and shrinking oil subsidies, greener alternatives appear to stimulate local economies.

“It means more traction: we can export more, so we can buy more from the locals, we employ more people to do this post-harvesting processing, sieving and packaging, so it’s a lot of economic activity going on,” says Heba Labib, whose company Nile’s Gift exports medicinal herbs and spices.

But what of concerns that advances in technology will have the opposite effect on jobs? Nothing to worry about, according to Boston start-up Harvest Automation. At its site a little robot scurries around, using a set of sensors to move potted plants, arranging them in a pattern that optimises growth. Until now, this was always done by humans.

“This job of moving the plants around on the ground is the worst job on the whole farm,” says Harvest Automation CEO, Charlie Grinnell. Dozens of his clients of have passed this task on to robots: “Nobody was losing their jobs in this industry when the robots came along.”

The manufacturers say their robots aren’t killing jobs. Quite the opposite: they help growers hire more workers who want to do something more valuable than just moving plants around.

“Everyone would rather do other jobs, whether it’s tending to the plants as they are growing, or driving a tractor, or other things,” maintains Grinnell. “My customers have a challenge just finding workers to do this kind of work.”

Developers expect artificial intelligence to quickly move beyond moving pots around. Another Boston company, Neurala, is developing software that memorises and then recognises visual objects – almost like a living brain does. The software can teach a machine what bottles look like, allowing it to identify them.

“We realised that what people actually wanted were brains inside these devices, so that these robots could have capabilities similar to animals or humans,” says Massimiliano Versace, Neurala CEO.

Learning machines can excel in tasks like finding a lost child, tracking endangered animals, or detecting rust on a pipeline. But what about the people who do these jobs now? Versace sees the eventual replacement of humans as a liberation: “Handing tickets out on a highway should not be a human job. Looking in a security camera should not be a human job. This should be done by machines. So I think AI is a liberating technology. And the opposite – not having AI – would be slavery.”

The UN’s International Labour Organization has formed a Global Commission on the Future of Work tasked with an in-depth examination of current trends. Experts like these at Harvard University will help the Commission in their analysis of issues like the proliferation of AI technologies in business.

“Enterprises leveraging artificial intelligence will allow them to just have a much better outcome, says Sophie Vandebroek, Chief Operating Officer, IBM Research. It will allow physicians to personalise health care for individual patients. It will allow security officials to much more quickly react to a vulnerability in the IT network and ultimately not being hacked. You can go across industries.”


#AI won’t fully replace human specialists until the “general AI” stage expected by 2050s: I’ve talked to S_Vandebroek, COO of IBMResearch, for our special Spotlight on #FutureOfWork — next week on euronews and africanews. pic.twitter.com/XBJA8EB5bn


Harvard researchers and innovators are tackling tomorrow’s big questions – such as who will profit from all the wealth generated by machines?

“We, the people of the world, have got to own this new technology, so that the profits and rewards come broadly to people, rather than go to a few billionaires. Because the owners are going be the winners,” says Richard Freeman, a Harvard economics professor.

How will societies cope with a future of work that seems drastically different from what we’re used to?
Vivek Wadhwa, Distinguished Fellow at Carnegie Mellow University takes an optimistic view: “If we have everything we need – and we do not have to work to subsist, to survive, work becomes a luxury. That may actually be a good thing. Why do we have to work? Why do we have to work 50 hours a week, why can’t we work 10 hours of week? Why can’t we now have time for the arts, for recreation, for enlightenment and knowledge?”


#AI will spread across industries, with companies embracing tools like predictive modelling in order to remain competitive. At Harvard, I talked to feature_labs’ CEO maxk for our upcoming feature on #FutureofWork. pic.twitter.com/MdrZ0wdGvY

The Global Commission on the Future of Work will present its independent report in 2019. Its work raises a multitude of questions for employers, employees and society as a whole. Spotlight’s Denis Loctier discussed some of these with Guy Ryder, the Director-General of the International Labour Organization.

Spotlight: We have just seen couple of examples of how technology can make businesses more efficient. But do we comprehend the whole scope and scale of this? To put it bluntly, are machines about to take all of our jobs?”

Guy Ryder: “No, I don’t think they are about to take all of our jobs, but as your report showed very graphically, very well I think, the application of new technologies has the capacity to both create jobs, but also to replace human beings. These are both realities that we’re going to have to face, as we embark upon what people call the 4th industrial revolution. And if you try to learn from history, look at those first three industrial revolutions, we know that after a period of turbulence and adjustment we actually came out better off than we started – more jobs, better quality jobs, higher standards of living.

“We’ve seen reports saying that up to a half, or even sometimes more than a half of the existing jobs in industrial countries could potentially be replaced by robots etc. They could be – doesn’t mean they will be. Because there are very many limiting factors on this replacement effect. One is the availability of technology and capital, the other is the pure economics.

Spotlight: “It’s not just the developed countries – work is evolving around the planet. What is driving these changes?”

Guy Ryder “Yes, indeed, we should not think that there’s one future waiting for all of us. If you go to a country like – let me take the example of Japan. There we’re seeing rapidly ageing populations, and workforce is shrinking. It looks a bit different in the developing world, where – if I think of Africa, if I think of South Asia – you have rapidly growing populations, very big demand for youth employment. There, of course, the issue of technological replacement of labour looks a bit different. And perhaps one other aspect, if I might bring in, is the whole question of the green economy. The developing world has a very very strong potential to benefit from the move to a greener and greener, environmentally sustainable economy.”