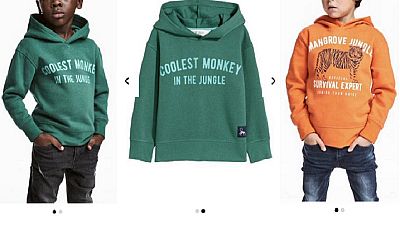 Swedish fashion brand, H&M have attracted a strong social media backlash after what most people considered a racist photo appeared on their website.

The said photo showed two boys wearing hoodies on H&M’s United Kingdom store website. It turned out that the inscription on the respective apparels was the source of the Twitter outrage.

Whereas the white boy’s hoodie read: “Mangrove Jungle Survival Expert,” that of the black boy was “Coolest Monkey In The Jungle.”

CNN quotes a company spokesperson as saying H&M was sorry if the ad offended people: “This image has now been removed from all H&M channels and we apologize to anyone this may have offended.” That has done little to appease persons angered at the photos.

“In the year 2018 there’s no way brands/art directors can be this negligent and lack awareness. If look at other sweaters in same category they have white kids. We have to do better,” an art director Alex Medina of Vox Media tweeted.

One Twitter user, Mimicgawd, gave a cartoon rendition of the racist photo: “Coolest kid in the racist a** H&M catalog,” the new inscription read.

.hm this is inappropriate, offensive, and racist. Why is the white kid "a jungle survivor" and the black kid the "coolest monkey in the jungle"? How do you think this is okay? REMOVE this and the clothing piece. This is completely distasteful! #racist #hm https://t.co/uati7eI0Io pic.twitter.com/WSF9Wiksio

H&M hm YOURE CANCELED. When you know about Ota Benga’s story, things like this enrage you even more. Don’t think we’re not onto your racist propaganda. It just blows my mind how often big corporations wanna try us everyday. pic.twitter.com/LfGhsO3iAv

Im starting to think”these people” are being racist for publicity!This is racist & insensitive.This beautiful boy doesn’t even know what hm is making out of him!A whole team shootin&no1 saw whats wrong with THIS #hm #h&m #boycotth&m #racist #GoldenGlobes2018 balleralert pic.twitter.com/yfspBxFqAB

I used to like hm but then I realized they are a piece of racist trash. What is this garbage they have on this kid! Ridiculous and insulting to the black community #BoycottHM pic.twitter.com/8Pv9Yft1E3