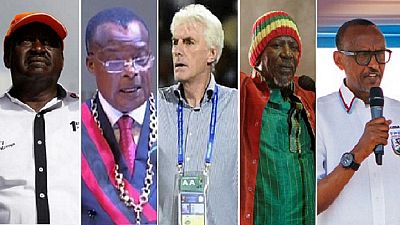 The 2017 news year threw up its fair share of quotes from prominent figures across the political, sports, business, human rights and culture spheres.

As part of Africanews’ review of 2017, we have pooled together a dozen quotes that stand out for different reasons. Which is your top pick?

Interact with us on our social media platforms Facebook, Twitter. Our 2017 review page is also active with more stories on the top news, photos and occurrences across last year.

‘‘I don’t have 23 players, I have 23 friends. Over the weeks we went from being a squad to being a family. It is unbelievable what all the guys did. It is tremendous.

‘‘This was the reason we won the cup, because of the spirit in our camp, the guys who were on the bench were happy – and the players who came off the bench, decided the game.”

I am not God, and I have not said that I will be president for life. What is true is that we have never usurped any mandate, and all the mandates we have exercised have been given by the Congolese.

For the time being, we have a mandate from the people and we will carry it out to the end if God wills it.

In addition to lecturing, returning to her farm and also catching up on sleep, Africa’s first democratically elected female president wants to read after office.

“I want to be able to read all those books. And then compare their life story with mine, my experiences as president.”

“Being president for a very long time is not a bad thing. That is why I am experienced … Even if you woke me up at night, I will tell you what is happening.

“If you want to be a leader, you should avoid prejudice because prejudice can make you live with envy; you will end up getting high blood pressure.”

“Well, really after 12, 15 years, some of them up to 30, some have fears, I think that now they are becoming a rare commodity. And maybe if you don’t leave office, what happens, office will leave you.”

“May I say today, the President of the United States Mr Trump; please blow your trumpet. Blow your trumpet in a musical way towards the values of unity, peace, cooperation, togetherness, dialogue which we have always stood for and which is in the charter of the United Nations.

“We have resisted it when it was in the form of imperialism as we fought for our own independence, our own culture, our own sovereignty to be masters of our own destiny. That’s why we call ourselves free today because the monster of imperialism was defeated by us.”

“Those who want to campaign for gay rights should find another country that allows those things. If we establish that any organisation registered in our country is campaigning for gay rights …

“I will deregister that organisation. If a Tanzanian national is doing that campaign, we will arrest him and take him to court … and if it is a foreigner, we will immediately order him to leave the country.”

“Let me apologize for telling you that we are Africans who count on you to defend us and to protect us, we are surprised and amazed at your silence over the dismal, humiliating and unacceptable situation that your nationals, brothers, sisters, our sons and daughters are sold as slaves in Libya (a member of the African Union).

“We are going into a war and we must fully conserve our energies before the day of battle which is August 8. None of us should have sex on the eve of the polls.

“All women should deny their husbands conjugal rights on the eve of voting,” he said.

Akufo-Addo talks tough on aid during Ghana visit by Macron

“We can no longer pursue a policy for our countries and regions that is based on the support given by the West, France or the European Union. This has not worked and it will not work.

“It is not right for a country like Ghana – 60 years after its independence – to depend on the generosity of European taxpayers when it comes to financial means for health or education.”

Paul Kagame – Africa must define its type of democracy

“Maybe let’s talk about democracy, and not western democracy, because is there something called democracy without putting the western thing? If we can do that, maybe that’s where I stand.