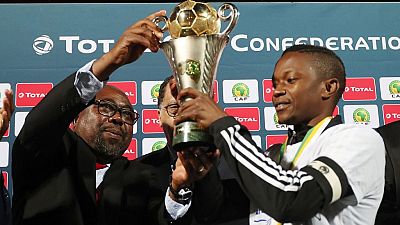 TP Mazembe Englebert, of the Democratic Republic of Congo, retained the African Confederation Cup on Saturday, a goalless draw at South Africa’s SuperSport United in the second leg of the final in Pretoria securing their 2-1 win on aggregate.

It was the fifth major continental title inside a decade, and the third in successive seasons for the Congolese club who were also African Champions League winners in 2015.

Both sides ended with 10 men as the game descended into a tempestuous affair in the closing stages, with Mazembe defender Kabaso Chongo and SuperSport’s midfielder Thuso Phala both being sent off late on.

Mazembe, who had won the first leg 2-1 in Lubumbashi last Sunday, had chances to win the match, their captain Rainford Kalaba and midfielder Daniel Adjei both missing with the goal at their mercy in quick succession early in the game.

The South African side, playing in their first final, had just one shot on target through the 90 minutes.