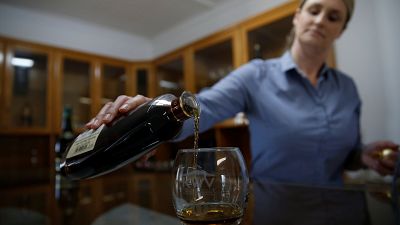 These are the orders ringing out in bars across South Africa as thrifty consumers switch from imported, big-brand whisky to various types of locally produced brandy to quench their thirst.

The trend, fuelled by a stagnant economy that is strangling spending, has led to the first increase in brandy sales for more than a decade, and falling sales of pricier whisky.

This is an unexpected reversal in a country that multinationals Pernod Ricard and Diageo targeted as a lucrative growth market for their whisky brands, and where they had enjoyed years of surging sales among an emerging middle class. Pernod Ricard sells more Jameson in South Africa than anywhere else apart from the United States.

Brandy still lags its rival in the contest to be the number one spirit by some distance – about 32 million litres is sunk a year versus nearly 39 million of whisky – but the gap has almost halved since 2014, when the economic slump set in.

Most brandies retail for around $8 (110 rand) for a 750 ml bottle, compared with around $13 for Diageo’s Johnnie Walker Red Label and $20 for Pernod Ricard’s Jameson, the two most popular whiskies. A significant price difference in a country where the minimum wage is less than $2 an hour.

“At my local a double brandy is the same price as a single Jameson,” says Fred Bester, 36, a sales consultant for technology startups in Johannesburg. “That’s why I now drink brandy.”

The international companies, however, are fighting back. They are shifting focus to more affordable whisky brands and dipping into their war chests to step up marketing drives.

Pernod Ricard does not break down results by country, but acknowledged brandy was taking market share in South Africa because of lower pricing.

The company’s national sales director Werner Vosloo told Reuters it was trying to avoid a “knee-jerk” reaction that could damage the long-term potential and image of its brands and so was steering clear of price cuts.

He said it was also increasing advertising and promotional spending. He declined to provide figures, but the drive is evident on billboards, TVs and social media across the country.

Hollywood actor Don Cheadle can be seen sipping Chivas Regal on a huge billboard overlooking one of the country’s busiest routes, on the way to the Johannesburg business hub of Sandton – known as the richest square mile in Africa.

Pernod Ricard has also had a marketing push for its more affordable premium brand, Ballantine‘s, which costs about $15. It is trying to woo customers with “gift packs”, said Vosloo, typically a free whisky glass or two when you buy a bottle.

Britain’s Diageo, the number one player, has seen a 6 percent drop in whisky sales volumes over the past year. But it said this year that it was benefiting from the launch in the country of Johnnie Walker Green Label – a more affordable gift option to its high-end Blue Label. A bottle costs $47 versus $160.

The two companies dominate the market for whisky, which accounts for a third of the South African spirits market. They are, however, somewhat insulated from falling sales by solid demand for vodka, which they also sell. It is the nation’s No.3 spirit, with about 27 million litres consumed last year.

At the turn of the century, brandy – first distilled in South Africa on a Dutch ship in Cape Town harbour in 1672 – was the number one spirit by a stretch, with around 40 million litres consumed a year, almost twice the amount of whisky.

Slowing economic growth over the past three years has hammered household incomes. After a recession in the first two quarters of 2017, growth is forecast by the central bank to reach 0.6 percent this year, not nearly enough to make a dent in the unemployment rate of 27.7 percent.

Whisky consumption has dropped, falling from a high of 43.2 million litres in 2014 to 38.7 million in 2016, data from industry monitor SAWIS shows.

The consumption of brandy, or brandewyn – an Afrikaans word that means “the wine that burns” – meanwhile increased for the first time since 2005 last year, to 32.1 million litres, from 31.6 million in 2015.

The recovery is driven by locally produced products – French Cognac and other imported brandies account for only 1 percent of the market and are aimed at the wealthiest consumers.

The surge in local brandy sales is also supporting the local wine industry because South African regulations require brandy producers to use wine as their base product. With every 1 percent rise in brandy sales volumes, the price of distilling wine is lifted by 0.9 percent, according to industry players.

“Wine producers earmark grapes specifically for wine that goes to brandy producers and they usually get paid quite quickly, which is good for cashflow and supports thousands of jobs,” said Christo Conradie of industry group Vinpro which represents 3,500 wine producers.

The chief executives of two of the largest three brandy producers – Distell and KWV – told Reuters that the rising sales trend had continued since the latest SAWIS figures were released, and that they had both seen a 5 percent increase in volumes in the past year.

“Brandy sales have recovered and it has definitely been the weaker economy playing a role,” Distell’s CEO Richard Rushton told Reuters. “Consumers are cutting back and have been choosing brandy as good value for money.”

Distell makes Klipdrift and Richelieu, nicknamed klippies and Ricky Louw (a common name) by drinkers. But it’s the cheaper Viceroy label – about $7 a bottle – that has shown the strongest sales growth, Rushton said.

Boyce Lloyd, CEO of KWV, which makes brandy of various cask ages under the KWV label, said the economic slump had fuelled a “renaissance” for the spirit – widely dubbed karate water because of its alcoholic kick.

“With brandy you can get a quality product for 50 percent cheaper than a whisky or a vodka.”