Egyptian woman could be UNESCO's first director-general from Africa 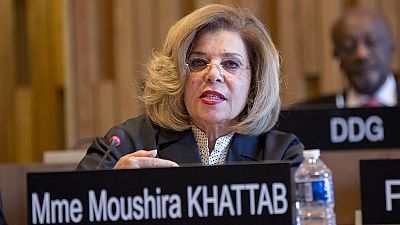 Moushira Khattab, Egyptian human rights advocate and the country’s nominee for UNESCO director-general position could be the cultural agency’s first leader from the African region.

She is contesting with eight other nominees in the October 9 election which will take place at the ongoing UNESCO Executive Board meeting in the French capital Paris.

They seek to replace the outgoing director-general Irina Bokova, a former Bulgarian foreign minister who became the first woman and first eastern European to lead the organization in 2009.

She served the maximum two four-year terms as one of the only ten directors in its 72-year history; seven of whom have come from Europe and North America.

Moushira Khattab’s nomination is the second attempt by Egypt after it nominated former culture minister Farouk Hosni who lost the election in 2009 to Irina Bokova.

Khattab is known for championing women’s and children’s causes. She is also on the board of the National Museum of Egyptian Civilization.

Voting is done using the secret ballot system and behind closed doors. On October 9, if no candidate obtains a majority vote after the first round of voting, a second round will be held the next day.

This will continue daily until October 13 when a final vote will be held between the two candidates who received the most votes on the previous day.

If there is a tie, the chairman of the meeting will draw lots to determine the winner.

The new director-general will be confirmed at the UNESCO General Conference in November.

France teacher's beheading: what we know so far

France teacher's beheading: what we know so far