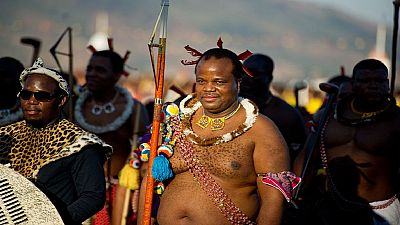 Swaziland’s King Mswati III has picked his 14th wife in the person of 19-year-old Siphele Mashwama, a few weeks after the annual Umhlanga or Reed Dance ceremony participated by about 40,000 maidens.

The King is traditionally mandated to pick a new wife every year from the virgins who partake in the traditional chastity rite held at the Ludzidzini Royal palace near Swaziland’s capital Mbabane.

The latest addition was announced to the media over the weekend by an official of the royal household Hlangabeza Mdluli who said the 49-year-old King’s new wife will travel with him to New York for the recently held 72nd United Nations General Assembly.

Siphele Mashwama is the daughter of Swaziland’s cabinet minister, Jabulile Mashwama. She is a graduate of the Waterford Kamhlaba World University College in the capital city.

King Mswati III has divorced three wives and has over 30 children. He became the Crown Prince in 1983 and then in 1986 he was crowned King at the age of 18.

He succeeded his father King Sobhuza II who ruled Swaziland from 1921 to his death in 1982.

This is an annual traditional chastity rite participated by thousands of maidens who camp at the Ludzidzini royal residence, where the Queen Mother lives.

They march to Engabezweni royal residence where they are commissioned by King Mswati III before going out to surrounding communities to cut tall reeds.

Placed according to age groups and led by male guards, the maidens put the reeds together and send them back to the royal residence the following day. The reeds are used to mend holes in the reed fences and buildings.

The maidens rest for a day and take baths mostly in the river. They then prepare their traditional costumes including bead necklaces, anklets, skirts and a sash.

They then dress up in their skirts and sash with their bosom exposed, as their customs stipulate. Holding the knives they used to cut the reeds as a symbol of their virginity, they march to the forecourt of the King’s palace where the royal family, guests, tourists and the public are seated.

The maidens display culture and tradition as they sing and dance for the King who chooses a new wife at the end of the ceremony.

The annual ceremony created in the 1940s in Swaziland is to preserve the women’s chastity before marriage, serve the Queen Mother, and strengthen solidarity among the women as they work together.